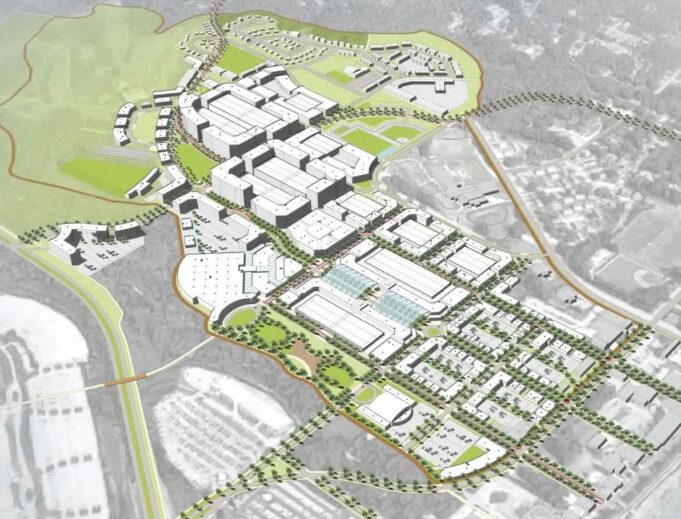 Since the start of the pandemic, the Atlanta metro area has been experiencing an increased flurry of air travel in and out of the city. Airports Council International named Hartsfield-Jackson Atlanta International Airport as the busiest airport in the world in 2022, with a 76.4% increase in flights over 2020.

For developers, the additional people going in and out of the airport means the need for more sites in and around Atlanta, including South Fulton County. The county is the home of Porsche’s North American headquarters and the Georgia International Convention Center, the state’s second-largest convention center.

The area’s fast access to the airport, about a half-hour’s drive away, is encouraging greater mixed-use development to support the needs of its growing population.

Aerotropolis Atlanta Alliance is working with developers to advance the South Fulton County region, where the public-private partnership is focused on “coordinating meaningful and exceptional economic developments” that leverage the county’s proximity to the airport.

Aerotropolis Atlanta Alliance President and CEO Shannon James said South Fulton County has been exponentially growing and is on track to have the infrastructure needed to transform into a live/learn/work/play community, with the airport serving as the central hub.

“Airports are becoming the new urban centers, and having an urban center near your residence and place of work is a tremendous value, and we recognize that,” James said. “What we’re doing is improving our coordination, not only around the growth of the airport and its boundaries, but also of everything surrounding it.”

He added that the county had long been on the organization’s radar, in particular because of the opportunity for industrial development.

“Within the eight cities of South Fulton, we’ve seen the presence of industrial development growth thanks to strong supply and demand and availability of land,” James said. “Advanced manufacturing is really growing in our region and leading in the industrial space. Industry is coming to our region, and with that, we want to make sure that the living accommodations, the ability to play and go to school is emphasized in our region.”

Aerotropolis Atlanta Alliance developed a “blueprint” in 2016 to guide growth in the region, South Fulton County included. Pinpointing particular sites for mixed-use development is a major part of its plan, supplemented by new green space and walking and biking trails.

James said that a second version, called Blueprint 2.0, is in progress and will help the organization identify more spaces for economic growth.

“The potential impact of Blueprint 2.0 to drive regional economic competitiveness for the area surrounding the airport is absolutely critical,” James said. “It will allow us to galvanize the region and activate sites for job creation, economic impact and quality-of-life elements that the region has been needing for a long time.”

One of these South Fulton County sites is the Six West development, located in College Park, being developed by Ackerman & Co. It features nearly 740K SF of restaurants, shopping and entertainment venues and 2.3M SF of office space.

Steve Langford, senior vice president of investment sales at Ackerman & Co., said the development will help to reduce traffic throughout Atlanta, as residents and visitors can find everything they need just steps away. Aerotropolis Atlanta Alliance, he said, has played a pivotal role with outreach.

“Aerotropolis Atlanta Alliance does a tremendous job in promoting our efforts and what we’re doing specifically in the city of College Park within the development project,” Langford said. “The team works diligently, allowing each one of the municipalities within their collaborative to have both a seat at the table and a voice.”

Will Casaday, director of development at South City Partners, said that the organization worked with his firm to figure out how to best help residents in Hapeville, Georgia, another community near the airport.

“As we familiarized ourselves with the marketplace and the surrounding environment, Aerotropolis Atlanta Alliance was helpful in assessing what was going on in the area and helped us come up with how we can best serve those needs,” Casaday said. “It allowed us to get in touch with people that we otherwise maybe wouldn’t have gotten in touch with and assisted us in recognizing opportunities that we maybe wouldn’t have otherwise recognized.”

Casaday said South City Partners is working on multifamily and retail development as well as single-family homes. With assistance from Aerotropolis Atlanta Alliance, the company was able to move its development project from inception to approvals.

James said that while Metro Atlanta is ripe with opportunities, the greater focus needs to be placed on underrepresented areas such as the area surrounding Hartsfield-Jackson.

He said that taking a regional approach to provide solutions and getting stakeholders on board will help the county become “a premier central business district.”

“The proximity to the airport is the gateway to the world — to business and commerce,” James said. “There needs to be proper planning, investment, time, resources and human capital to make it happen.”

This article was produced in collaboration between Studio B and Aerotropolis Atlanta Alliance. Bisnow news staff was not involved in the production of this content.