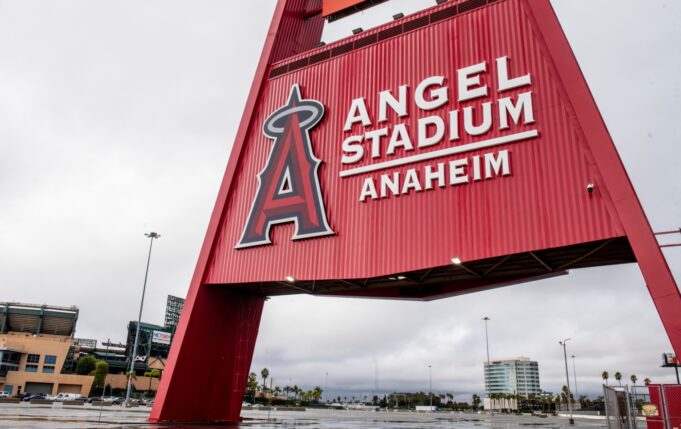 In coming years Anaheim could gain up to 1,104 affordable homes, thanks to the sale of Angel Stadium and a settlement with the state over a housing dispute .

But it’s so far unknown where the vast majority of them would be built, and the developer would have 25 years to build any of the 84 to 104 affordable apartments that would go on the stadium site, according to a draft of proposed changes to the city’s development agreement with buyer SRB Management.

The city released the draft as part of the agenda for the Planning Commission’s Monday meeting. The commission and the City Council must approve the amendment to the agreement.

The original deal would have sold the 150-acre stadium site to Angels owner Arte Moreno’s business partnership for $320 million, but the city would have credited more than half of that back to the buyer in exchange for community benefits, including 466 affordable homes at a cost of $124 million.

But to settle a dispute with the state over whether Anaheim broke an affordable housing law (state officials issued a notice of violation in December; the city has maintained that it followed the law), the two sides agreed late last month to a court-enforceable stipulated judgment that requires the city to spend $96 million of sale proceeds to build up to 1,000 affordable units offsite within five years.

Instead of crediting those millions back to the buyer for onsite affordable homes, the city will get them in cash when escrow closes.

The settlement, which city spokesman Mike Lyster said was submitted Thursday to Orange County Superior Court for a judge’s sign-off, also says that the remaining $24 million credited to SRB would fund a then-unknown amount of affordable housing as part of the stadium development.

The updated development agreement spells out how many on-site units the city would get for that $24  million: 84 apartments for very low-income families (they require a bigger subsidy), or 104 apartments split between low- and very low-income categories.

City and state officials also have said they will use the originally planned 466 on-site affordable homes as an aspirational goal, seeking any tax credits, grants or partnerships available; but there’s no requirement to reach that number.

Provisions of the deal that remain unchanged by the agreement with the state include the total sale price of $320 million; the right to develop up to 943 hotel rooms and more than 4.4 million square feet of office and commercial development; and the obligation to renovate or replace the stadium that was built in 1966.

Key changes between the original sale deal and the proposed amendments are:

The old deal set milestones for the development of affordable housing. A city fact sheet from September 2020 said at least 128 apartments for low- and very low-income families had to be built within 15 years; the full 466 units were required within 25 years.

The proposed amendment removes those milestones and only says the 84 to 104 affordable apartments must be built within 25 years.

The original deal gave the city recourse if the affordable homes weren’t constructed: at the five- and 10-year marks, the city could demand a plan within 30 days for how the developer would meet the obligation, and if the units still weren’t built about 18 months after that, the city could claw back more than $265,000 per un-built apartment, plus interest.

In the proposed amendment, if the affordable units the city is buying aren’t built within 25 years, its only remedy is to refuse to approve any outstanding development permits or go to court.

Under the old deal, SRB Management agreed to build a percentage of affordable homes at its own expense beyond the first 3,105 units; this would have worked out to 311 additional affordable units if the maximum allowed total of 5,175 homes were built.

The proposed changes remove the requirement for any affordable homes beyond the 84 to 104 units covered by city credits, but it doesn’t reduce the maximum units allowed, so the developer would be able to build hundreds more market-rate homes.

City leaders have touted the stadium sale and stipulated judgment as demonstrating Anaheim’s commitment to affordable housing. In an April 25 press release, state Attorney General Rob Bonta called the judgment “a win for the community and a win for the state.”

On Friday, Lyster said while the changes would mean fewer affordable homes in the stadium development the tradeoff is worth it – at least 1,084 units in total (and potentially more) around the city versus a maximum of 777 units on site in the old deal.

The financial clawback provision was removed at the suggestion of state housing officials, he said, because they worried it could be seen as a way for the developer to buy its way out of the affordable obligations.

The original sale deal has been criticized as shortchanging Anaheim residents; the city has always disputed this, pointing to an appraisal it commissioned that puts the sale price in line with market rate. Lyster said Friday that any suggestion that the changes give the stadium buyer an even better deal than before is unfounded.

“It’s a little oversimplified to look at and say somehow they’re getting off easier here. For anyone to come up with $96 million they weren’t expecting to in a very short time, that’s a significant commitment,” he said. “They would have accounted for this over decades but now they have to account for most of it in the very near term.”

HOA community lighting is a matter of security

Why Owning a Townhome Could be the Perfect Option For You