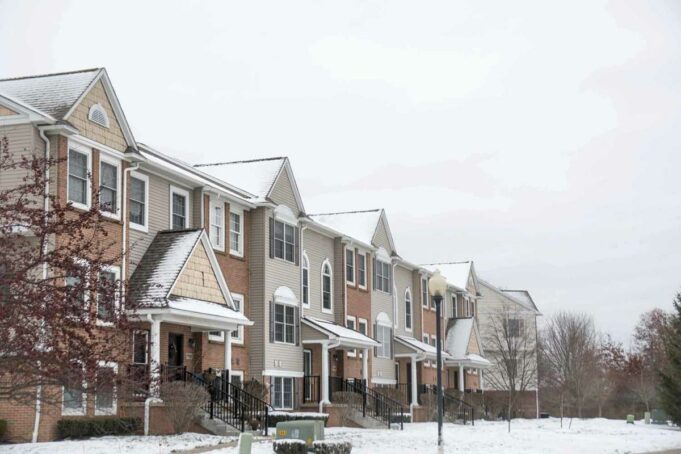 Shared From The TC Times
The Eagle at Waters Edge condominium community, which features townhome style houses, is located just east of downtown Fenton.
What do baby boomers and young professionals have in common? Both of these age groups are the two most interested in condominium living, mostly for the low maintenance, affordable lifestyle that condos can provide.
“Condos are all the rage right now,” said John Tremaine of Tremaine Real Living Real Estate. “Baby boomers are downsizing. I’ve got people with houses here, up north, down south, yet they still want to keep a foothold here to be near family.”
Patrik Welty of Legacy Realty said that more people are stepping into the condo world because they are more affordable than single-family homes and there is more inventory from which to choose.
“In the last year, the number of condo units sold is up over 20 percent in the Fenton, Lake Fenton and Linden area,” Welty said. The tri-county area has more condo developments than you might think.
The largest ones are in Fenton, including Whisperwood Condos with 171 units: Eagle at the Waters Edge with 86 condo and townhouse units and four more under construction, plus The Village of approximately 90 duplexes. The Landings at Cranes Cove is now in its third phase of development with a total of 119 lots.
If you’re interested in condo living, you have to move fast because condos are not on the market long. In fact, sometimes they’re sold before they ever hit the market. “We usually don’t have many available,” said Bill Moilanen, president of the Whisperwood Condo Association. “Your timing has to be good.”
Carol Ray of Berkshire Hathaway Michigan Home Services in Fenton said a large condo at Whisperwood with a two-car garage recently sold overnight for $219,000 “and it needed work,” she said. Whisperwood was developed in 2001 by local builder Joe Asher. “He was the pioneer,” Tremaine said. “It’s definitely a well-established development with rolling hills and wooded areas. “
Whisperwood offers six different floor plans. Most are two bedroom/two bath units with a loft area and one-car garage. Some of the larger units with three bedrooms have a two-car garage. Home Owner Association (HOA) fees vary based upon square footage, typically starting at $150 on up.
A two-car garage is one condo feature that many people seek out. “It’s usually two active people and they want a two-car garage,” Ray said. “They also want ranch condos with finished lower levels and a flex space for a den or study. People are spending top dollar on condos and are willing to wait six to eight months to get what they want.”
Those are some of the advantages buyers will find at Eagle at the Waters Edge, a mile east of downtown Fenton. There are 86 three-story townhouses and two-story condos with another four currently under construction. The Village, a neighborhood of duplexes on Shoreline Court, numbers close to 90.
There are also Villas, or single-family homes in the Waters Edge neighborhood, all of which contribute funds to common areas that residents enjoy — including gazebos, main sidewalks, a playground and nature trail.
“Our units usually sell in less than a month,” said Jason Gieseler, president of the Eagle at the Waters Edge Association. One of the main selling points of the Waters Edge condos is their close proximity to downtown Fenton while enjoying a natural setting with birds, deer, etc.
Fifteen Waters Edge condos are currently for sale, including one resale and the rest are under construction by Building Junkies. Prices are about $140,000 for the resale of a two-story condo and about $207,000-210,000 for new construction. The new Village duplexes are priced at $270,000 and up. HOA fees are $210 per month.
The Landings at Cranes Cove, off Lahring Road, has 119 lots in phase one, two and three stages of development. “The first 45 are pretty well filled up,” Tremaine said. “There are about four or five for resale. They’re in the process of building another four or five units. Prices are from about $270,000 to about $330,000. HOA fees are $170 per month for connected condos and $180 per month for detached condos.
“We’re slightly over 50 percent developed,” said Sam Natchez, a nine-year resident of The Landings. “It’s a great community
Be wise when buying a condo
• Be aware of potential obligations, including litigation, road conditions and possible future assessments. “This will help you plan your budget,” Patrik Welty of Legacy Realty said.
• Read the fine print about your responsibilities as a homeowner in a condo association. “Consumers assume that all associations are the same or cover the same things,” Welty said. “This just isn’t the case.”
• The buyer should see the master deed and read the bylaws so they understand the land use and restrictions. “Condo living isn’t for everybody,” Welty said. “There may be issues about parking, pets, common area restrictions, hanging a flag, planting flowerbeds, etc. In an association, you may lose the ability to use your home as you see fit.”
Here are a few other condo developments in or near the tri-county area, however this is not an exhaustive list:
• Whispering Pines, off LeRoy Street in Fenton
• Fenton Harbor on Lake Fenton
• St. Andrew’s Way, off Lahring Road in Linden
• Cornerstone Condos in downtown Fenton
• Crystal Brook, off North Road in Fenton
• Lake Park Village, at Fenton and Baldwin Roads, Grand Blanc
• Timber Ridge, off Baldwin Road, Grand Blanc
• Glen Devon, off Lahring Road in Linden
• Meadow Pointe, off LeRoy Street in Fenton
• Fairfield Condos, off Silver Parkway
• Hidden Ridge in Linden
• Creekwood Colony in Linden
• Stonebridge in Holly
• Cornerstone in downtown Fenton
• Village of Riverside on Grange Hall Road in Holly
• Woodland Bay Condos on Grange Hall Road, east of North Holly Road in Holly
• Stonewood on Elm Street in Holly
• Holly Pines on Elm Street in Holly
See also  How a home improvement fund can upgrade your new house to a home

HOA Homefront: Does your community have a policy for solar installations?