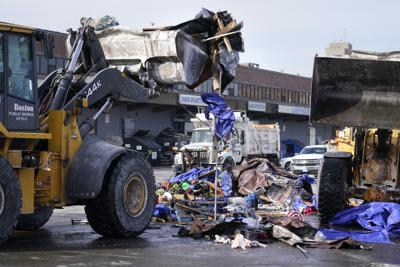 Workers started removing the last tents Wednesday morning from a once-sprawling homeless encampment at a Boston intersection known as Mass and Cass.
New Mayor Michelle Wu had pledged by Wednesday to get housing for people living in tents near the intersection of Massachusetts Avenue and Melnea Cass Boulevard. Wu acknowledged that it may take more than a day to remove some of the remaining tents.
“Our goal from the beginning here was to take a different approach, one that was really grounded in the root causes of homelessness and the crises that people are living with here,” Wu, who took office in November, said at the scene.
Police were also at the scene Wednesday, but Wu and other city officials have said that they do not want to criminalize homelessness, and that officers were there to keep the peace.
The city has approached the encampment as a humanitarian and public health crisis because many of its residents were drawn by methadone clinics and social services in the area and were considered vulnerable to trafficking and other dangers.
A city survey in December found as many as 140 people living in the camp, where drug dealing and use often occurs in the open.
Dr. Monica Bharel, the former state public health commissioner who is now leading the city’s efforts in the area, said that as of Wednesday morning, more than 100 people who had been living in the encampment had been relocated to housing.
But about a dozen or so tents remained.
Cleanup of the area began in October under then-acting Mayor Kim Janey, who declared addiction and homelessness a public health emergency.
The city Public Health Commission cited unhygienic conditions, such as a lack of running water and bathrooms, and the susceptibility of residents to “human trafficking, sex trafficking, and other forms of victimization,” in its emergency declaration last year.
See also  North Pier Ocean Villas to sell for $8.3 million to Wilmington company

Portland’s Population Grew By 30,000 Residents During the Pandemic

North Pier Ocean Villas to sell for $8.3 million to Wilmington...