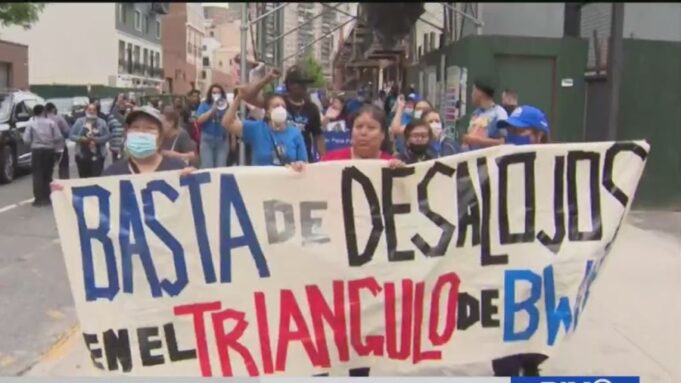 WILLIAMSBURG, Brooklyn (PIX11) — Five Latino families living in rent-stabilized homes in the Brooklyn Triangle section of Williamsburg are fighting to stay in their homes.

They live at 157 Lorimer Street and 347 Wallabout Street, and are being evicted so the buildings’ owners can reportedly use the properties for themselves. The families first received eviction notices in 2018. At the time, it was legal in New York for landlords to evict rent-stabilized tenants if they wanted to use the property for themselves or their families.

But, in 2019, the laws changed with the passage of the Housing Stability and Tenant Protection Act. The Housing Court reportedly closed the families’ eviction cases, and the families thought the issue was over.

An Appeals Court, however, just ruled that the landlords can move forward with eviction. Attorney Adam Meyers, who is representing the tenants, is trying to challenge the appeal.

“I do think this should be pretty cut and dry,” said Meyers. “Five different trial courts considered the question. Four courts said we should apply the new law.”

The tenants are among the last Latino families in the Brooklyn Triangle neighborhood of Williamsburg. They have lived in their homes for decades, and were once the majority in the area.

“The landlord wants to only put his family in the building,” said Julio Andrade, who has lived at 157 Lorimer Street for 17 years. “I feel very sad. I feel very depressed that they want to force us out of their homes.”

State Senator Julia Salazar was among the local leaders who rallied in support of the tenants.

“Williamsburg has become very unaffordable, especially for lower-income Latinos,” said Salazar. “It is really alarming to see it play out this way, that really seems to be discriminating against the Latino tenants.”

In a statement to PIX 11 News, the landlords’ attorney, Meryl Wenig, wrote in part: “It is a sad commentary that tenant advocate groups…think that they are in a better position than the Appellate Courts to determine the constitutionality of portions of statutes enacted by the legislature.”