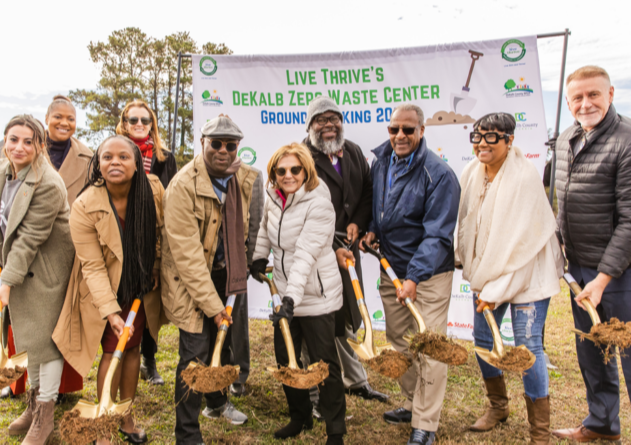 Written by The Champion Newspaper

Officials from DeKalb and Live Thrive broke ground on the project on Nov. 14.

The CHaRM facility is expected to have drop sites where residents can leave their hazardous waste and hard-to-recycle materials – in addition to preserving several acres of green space for community gardens and outdoor event space.

Live Thrive owner and founder Peggy Whitlow Ratcliffe said the facility will be an asset to DeKalb County because it will accept hard-to-recycle materials that moving companies can’t legally handle and that sometimes pollute land, air, and water at landfills.

“Cleaners, acids, bleach, paint … people don’t realize how harmful that is to the land when it’s put into the waste bin. It goes to the landfill and then eventually goes into the water system,” added Ratcliffe.

Officials from the nonprofit said DeKalb County gave Live Thrive land for the facility and that local volunteers and nonprofit employees are cleaning the area before engineers and contractors build the facility. According to Ratcliffe, Live Thrive hopes to open the CHaRM facility in April 2023.

“It’s what South DeKalb needs. It’s going to help us as we move toward … more green things. Giving us an opportunity to recycle and eventually putting a farm out there … anything we can do to create healthy eating and active living in our community,” said DeKalb County Commissioner Larry Johnson.

Johnson added that the vacant land—for which plans for a soccer facility fell through—will go from a location experiencing illegal trash dumping to a recycling facility with a garden.

“This is a win-win for everyone,” said Johnson.

Johnson added that county officials hope to coordinate a farmers market and other events at the greenspace and community garden.

Ratcliffe said this is Live Thrive’s second Atlanta area facility after the nonprofit opened in Grant Park in Fulton County in 2015. Ratcliffe said the Grant Park facility accepted 63,000 visitors in 2021 and that the planned DeKalb facility will have the capacity to handle even more visitors.

“It is a bigger space in DeKalb. We take 20 people every 15 minutes in Grant Park. Here, because the space is bigger and the cars will be more spread out, we can probably do more,” said Ratcliffe.

Live Thrive’s CHaRM facilities operate on an appointment basis. Their website instructs visitors on how to pack their cars. Upon arrival, residents drive to different drop-off zones to dispose of their materials. Live Thrive then sorts and prepares the material to be transported to other companies and facilities that can use the recycled products. Ratcliffe said she prefers local companies and some plastics are given to Nexus Circular—which turns plastic into “a fuel that goes to Shell Oil.” Cardboard goes to “WestRock Industries, which is one of the largest cardboard box makers in the East.”

“For mattresses, we work with Atlanta Furniture Bank. The mattresses can actually be deconstructed, sterilized, restuffed, and recovered to be given out to people,” said Ratcliffe. “1,500 mattresses from CHaRM last year went to the Gulf Coast to help with the hurricane.”

Ratcliffe said the facility is mostly funded by donations, grants, and government funds, but the recycled materials also bring in revenue.

Transparency is one of Live Thrive’s keys to success, according to Ratcliffe. She said the company’s entire recycling process—in addition to information on its recycling partners and material destinations—is available on Live Thrive’s website at livethrive.org/charm/.

“There’s so much distrust with curbside recycling, but there are ways to make sure that recycling is a valuable commodity that can go back out and also provides jobs. There is so much more to this than … helping the environment,” added Ratcliffe.

She added that the facility’s “emissions are nil,” because “we don’t really process things. We’re a drop site.”

“We worked with the Belvedere neighborhood to make sure it’s cool with them to have a facility like this right here—even though its already a high-commercial area—and they were really thrilled about it,” said Ratcliffe.

Belvedere Civic Club members were also taken on a tour of Live Thrive’s Atlanta location, which made the group excited about the proposed facility, according to club President Kenneth Powell.

“The property was purchased to be a soccer field, and I thought that was something our community needed, but then Commissioner Johnson reached out to the community about bringing a CHaRM facility there,” said Powell. “At first I was a little bit apprehensive—just because of the name—but myself and six others from the neighborhood got to take a tour while the [Atlanta] CHaRM facility was in use, and Peggy told us no toxic materials were coming there.”

According to Ratcliffe, Live Thrive’s success in Fulton County prompted several leaders from DeKalb to inquire about a second location coming to DeKalb. Ratcliffe said Johnson and DeKalb County provided the property that was originally bought for a soccer complex before plans for the soccer complex were moved.

In addition to the CHaRM facility, Ratcliffe said Live Thrive will convert several acres into community gardens and green space, and that Live Thrive employees and local volunteers will host environmental and conservation classes for students and community members at the green space.