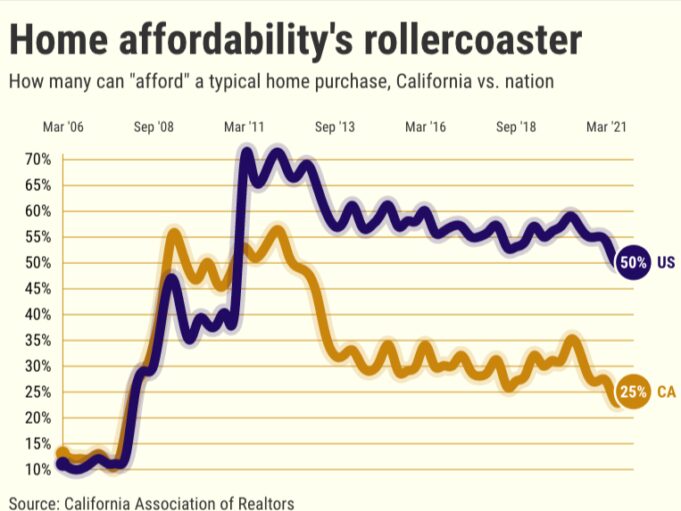 I’m confused about what’s being sold as “housing” in this pandemic era.  Are houses simply shelters for households? Or are they profit-making machines?  The “roof over your head” concept is still real. But ownership has become such a financial stretch for so many folks it’s also a strong “bet” that price appreciation, aka profits, is needed to close the deal.
Homeownership hasn’t been exactly hot. Last year, 65.5% of Americans and 54% of Californians lived in residences they owned — both slightly below metrics at the start of the 21st century, Census stats show.  Much of the blame lies within the odd pandemic economy that exploded prices across the nation and put “affordability” on the minds of house hunters across the nation. In 2021, the median selling price of an existing home jumped 21% both in California ($797,000) and nationally ($362,000).  Only half of America could afford a home at the end of 2021, the lowest level since 2010, says Realtor math. And just 25% of Californians have adequate financial muscle to buy, the lowest rate since 2007.
Yet an economist’s prism is not real life. Adjusting housing costs for a host of factors such as historical growth of income, inflation and low-rate mortgages can’t help folks actually make their house payments.  Cheap money  The pandemic apparently changed how folks thought about their living spaces, creating an urge to nest among young adults.  I’d argue the chance to lock in all-time low mortgage rates — a bailout gift to the housing industry from the Federal Reserve — was just as big of a house-hunting motivator.
The shot at 30 years of mortgage payments fixed at 3% or even less was quite alluring.  That same cheap money is a key reason why home prices soared. Remember, low rates allow house hunters to spend more since the monthly house payment doesn’t jump as much.  Southern California’s housing market cooled down after a pandemic rebound that ignited bidding wars and drove prices up to record highs six months in a row. But prices and sales leveled off from July to August, DQ News/CoreLogic figures show. (File photo by the Orange County Register/SCNG)  Deeply discounted rates also forced investors to rethink where they put their money.  Investors — notably Wall Street giants — upped their housing bets. Institutional investors are snapping up apartment complexes, gobbling up existing single-family homes, while builders are constructing entire neighborhoods of rental houses.  Meanwhile, individual purchases of second homes have soared in the pandemic era, too.
I have nothing against people who invest in real estate. But if we do have a housing shortage, should speculators be able to nudge out everyday folks looking for a roof they can call their own?  By one tally, 18% of U.S. homebuyers in 2021’s final three months were investors, the largest share this century. Redfin found 20% of Orange County buyers were investors; 19% in Los Angeles County; 18% in San Francisco; 16% in the Inland Empire — but just 12% in San Jose.  Generational wealth  I hear a lot of talk about growing homeownership because of its ability to create “generational wealth” that can be passed along to children.
Historically, this kind of gifting has been reserved for the upper crust. The typical recipient of any generational gifts had 37% higher income than a typical American and 175% greater net worth. They were also 88% white, according to a Federal Reserve study of 1995-2016 income data.  Certainly, real estate is a big part of that trend. Homeowners are far wealthier than renters with a median net worth of $255,000 vs. $6,300 for renters, according to Fed calculations in 2019.  However, it’s far too simple to suggest that more being an owner means being more wealthy. Homeownership isn’t for everybody. The easy lending era of the early 2000s proved this when many lower-income households were lured into buying housing they couldn’t afford.
What would our housing market look like if it was even harder to freely gift a home to your kids? Would higher levels of “death taxes” for homes level the playing field for future homeownership?  Maybe thinking is changing. California voters narrowly approved Proposition 19 in 2020, a ballot initiative limiting Proposition 13’s landmark property tax breaks on inherited real estate.
Or maybe not. Expect to see efforts to repeal that change on a ballot soon.  Risky business  I’m not worried about long-time property owners who are playing with equity they’ve earned over the past few decades. If they overpay for a retirement residence or a second home in the feeding frenzy, it’s mostly lost house money.  I’m simply reminding first-time buyers and wannabe owners that housing profits are by no means guaranteed.  So far, though, plenty of folks are jumping on the housing gravy train. Ownership fervor pushed home purchases, statewide and nationally, to levels last seen in the bubble days just before the Great Recession. Super-heated pricing has only mildly cooled the buying binge.
Will it last?  Housing, no less the entire economy, will have to digest the end of four decades of continual decline in interest rates. And the recent bout of inflation makes that rate puzzle even trickier to solve.  Enter Wall Street’s sudden interest in single-family homes — whether to flip for fast profits or to generate rental income. Institutional money has been a key propellent for the pandemic’s homebuying binge. Are those dollars being invested as a market-timing play or a long-run commitment?  Speaking of big money, homebuilders will eventually catch up to ownership’s newfound appeal. Will they once again respond to this kind of need by doing what they’ve historically done — build too much?
Also, there are the demographics.  We’re an aging society. Birth rates are down, even as young adults buy more homes. And immigration, even the legal kind, is a hard sell. The result is meager population growth, if at all.  So, there will be fewer people to replace the dying Baby Boomers, cutting long-term demand for housing.  And if the pandemic morphed homeownership into house-profit bets — will they pay off?
Written By Jonathan Lansner for  The OC Register
See also  Vandalized HOA Cluster Mailboxes Could Lead to Fines