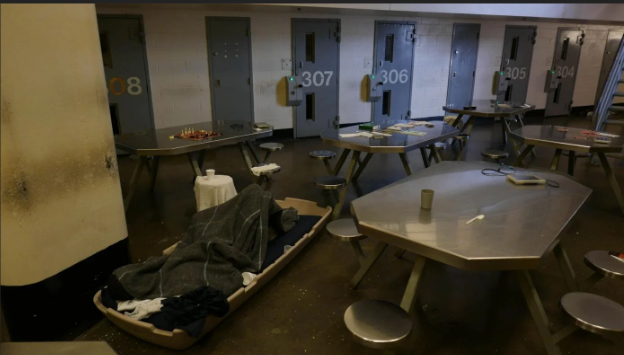 At the November 16 Fulton County Board of Commissioners meeting, Chairman Rob Pitts led a discussion regarding a recently released study by the ACLU about the Fulton County Jail.

ACLU Representatives attended the meeting to discuss the report. Several Commissioners and Fulton County COO For Justice & Public Safety Alton Adams expressed their concerns about the methodology of the study.

In her first official tour of the jail in February of 2021, Commissioner Khadijah Abdur-Rahman came away convinced that the county should abandon the current facility and build a state-of-the-art detention center.

Sheriff Patrick Labat, who took office Jan. 1, escorted the commissioner through the entire facility Wednesday, Feb. 10, so she could learn firsthand why he has asked the Board of Commissioners for additional dollars to renovate the overcrowded and outdated Rice Street jail in Northwest Atlanta.

“I saw what most Fulton County citizens have never seen, and if they did, they would be horrified,” said Commissioner Khadijah. “There are inmates sleeping on the floor because of overcrowding, and the living conditions are worse than what we see in third-world countries or war zones.”

During the tour, the commissioner, witnessed makeshift communication system — made with string and bottles — that officers use to pass critical messages to each other from one floor to the next through a shoot. There is also a need for updated, working cameras which several corridors are missing.

Inmate files that should be digital are years behind in filing, and many are housed in a condemned annex adjacent to the jail which looks like an OSHA nightmare. In the main kitchen, the dry-foods storage room has water leaking from the ceiling and a large commercial pots-and-pans dishwasher has been sitting idle for years. Sheriff staff members say they are actively working to upkeep the cell blocks, showers and other spaces, to prevent mold from setting in.

It is not just the inmates that are at risk. Detention officers and other staff are working in untenable conditions.

“We want our employees not only to be safe but be functional. I saw logbooks that look like they were from the seventies,” Khadijah said. “This is not the correct use of taxpayers’ money.”

“Quite frankly, we need a new building. We are throwing good money after bad, and we keep providing

‘Band-Aid’ solutions to an ‘open-heart surgery’ condition,” she said. “We have an obligation to treat inmates fairly and humanely, and to make sure they are safe, and that the staff that is safe too.”

“I commend the ACLU for its work in addressing the volatile issues regarding the inhumane treatment of individuals wrongly incarcerated in the Fulton County jail. It’s clear from the findings that resulted from their investigation that many of our public servants are refusing to put people before politics.

Though this issue has received more attention in the past few months, I recognize that this problem persisted long before the current sheriff assumed his post.”

The ACLU report shows that 728 people of the 2,892 people detained by Fulton County could be released expeditiously if Fulton County did the following:

Stopped the continued incarceration of people simply because they cannot afford their bond.

Indicted inmates accused of felonies promptly (within 90 days, as required by Georgia law).

Transferred individuals that are mentally ill and those awaiting competency evaluations to programs that support mental health services.

The ACLU findings are most disturbing because the intergovernmental agreement between Atlanta and Fulton County is a four-year lease to house 700 inmates. If City and County leaders are reviewing and taking into consideration the ACLU analysis, the need to lease space at ACDC due to overcrowding is eliminated.

Our focus should be reserving dignity and ceasing unjust discrimination of people who are victims of circumstances caused by poverty and insufficiency. The travesty of this is we can immediately solve the overcrowding, which I deem a ‘manufactured crisis,’ and not cost the public money or safety. While many argue against the data, research shows that mass incarceration is not effective, and it has not made us safer. No argument can be made toward locking up the mentally ill, those with no access to legal counsel, and others due to excessive backlogs – it’s fundamentally wrong and a violation of the constitutional rights of these citizens.

Hundreds of people in the Fulton County jail should not be there. We don’t have an overcrowding problem. We don’t have a ‘humanitarian crisis.’ We have a leadership problem. This problem is solved when public servants decide to make people a priority over politics,” Waites said.