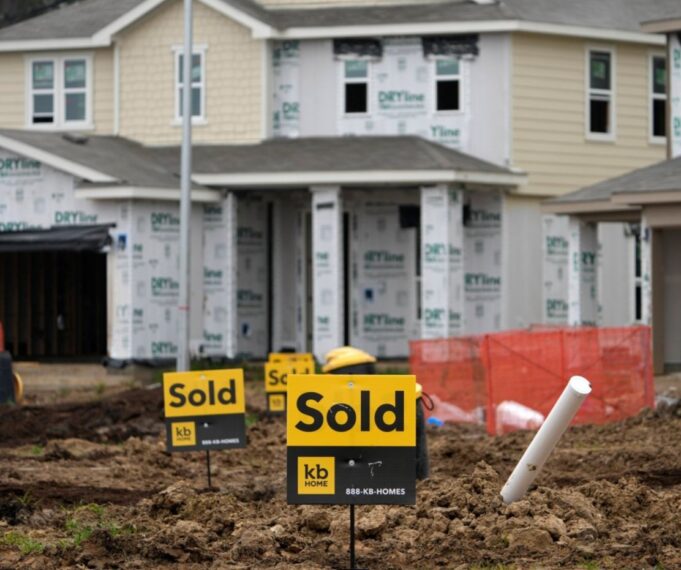 Investors are watching homebuilder stocks as rising interest rates threaten to shake up a sector that surged to record highs in 2021.  Rate increases may weigh on the stocks of builders like D.R. Horton Inc. and Lennar Corp. as a leap in borrowing costs has the potential to deter homebuyers, who are also facing lofty housing prices. This helps explain why the S&P’s Supercomposite Homebuilding Index, which soared 49% in 2021 compared with a 27% jump in the S&P 500, has sunk more than 14% since the start of the year compared with a 4.9% drop in the broader market gauge through Wednesday’s close.
Analysts say the demand boom that’s boosted the real estate market won’t necessarily be dented, depending on how far and how fast rates climb. But the stocks may still face pressure.  “We think history shows that a rising rate environment could be an overhang on stock performance,” Janney Montgomery Scott analyst Tyler Batory writes in a Thursday note about the stocks’ performance when 10-year yields increase. “However, we think there is less of an impact on housing fundamentals, which could present a buying opportunity for the sector.”
As Evercore analyst Stephen Kim put it in a recent outlook note, “the specter of rising rates has the potential to overshadow the group’s impressive results” despite strong industry fundamentals.  Kim, who has an outperform rating on all the builders he covers, added, “By year-end, we expect stronger earnings across the group to prevail, but the path forward for the stocks will be volatile, as pressure on valuation ebbs and flows with rate sentiment.”
Homebuilder stocks had been surging since mid-2020, as the pandemic pushed many people to work from home and spend more time hunkered down. That spurred home-buying demand, with bidding wars breaking out across the country as would-be homebuyers fought to get a piece of the nation’s slender housing supply. Meanwhile, builders faced clogged supply chains that lengthened construction times, further raising prices.  Not surprisingly, many homebuilding stocks soared to all-time highs in 2021, from luxury-building giant Toll Brothers Inc. to NVR Inc. and PulteGroup Inc. But 2022 is starting out on a very different note.
The S&P Supercomposite Homebuilding Index fell about 8% across Tuesday and Wednesday’s trading this week, marking its sharpest two-day decline since May. From their December record highs through Wednesday’s close, Toll Brothers has fallen 19%, NVR has given up 10%, Lennar slid 17% and D.R. Horton gave up nearly 18%, while PulteGroup has retreated by about 15% since its May peak.  Now, the sector “must contend with challenging comparisons early in the year — which doesn’t help with optics — as well as persistent inflation and the specter of higher interest rates,” Bloomberg Intelligence analyst Drew Reading writes in an outlook note on the sector.  Historically, homebuilder stocks have fallen during the Federal Reserve’s tightening cycles, according to KeyBanc Capital Markets analyst Kenneth Zener. In a note downgrading a handful of homebuilder and building products stocks, Zener pointed out that since 1969 builders have declined in 16 of 18 tightening cycles.
They “face a Wall of Worry,” he writes, “as inflation concerns supersede favorable housing fundamentals.”  The rates for 30-year mortgages have at least another 50 basis points of room — to approximately the 4% range — before “we see some pause from buyers,” Wells Fargo analyst Deepa Raghavan said in a message last week, adding that level may not be reached before the midterm elections in the fall. “So no change to my bullish view of 2022 at all.”  Builders are on fundamentally solid ground to face the potential oncoming rates storm, according to Reading.  “Though growth may moderate, we expect absolute demand to remain steady and think still-solid pricing can offset costs,” he wrote. “Housing can absorb rising rates, assuming the increases are modest and gradual.”
Written By Bloomberg on  The OC Register
See also  Should Fireworks In An HOA Be Allowed or Banned?