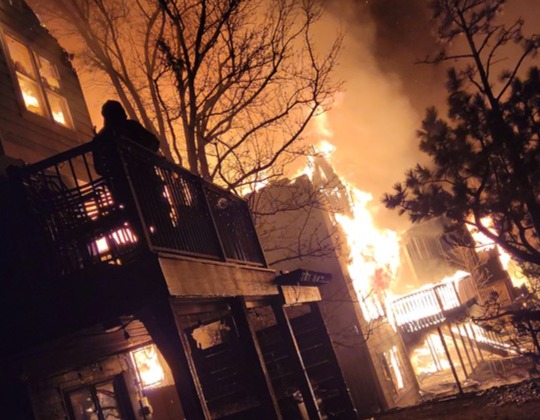 LOUISVILLE, Colo. — The morning before more than 100 homes burned in the Coal Creek Ranch neighborhood in Louisville, priorities were different.  “We had neighbors going out wearing goggles to keep the ash out of their eyes and they were adjusting the trash cans to make sure that the trash truck would still be able to pick them up,” said Andrew Zimmer, who lost his home.

“That’s kind of where you are when that’s happening.”

Zimmer, his 3-year-old child, and his pregnant wife quickly shifted their priorities.

“The trash cans are all melted, so trash pickup success,” he said sarcastically.

His neighborhood is part of a homeowners association. Their fees pay for things like trash pickup and common areas like a clubhouse and a pool. Those survived, but are damaged.

“We have an automatic payment set up, so we paid before the fire, and then we were thinking, ‘oh, are we going to get that money back? We don’t really live in the community anymore,'” he said.

But Zimmer received an email from the association saying they are still collecting dues, minus the trash fee, which will work out to $43.25 a month.

“But of course, it’s a clubhouse we won’t be using, so it didn’t seem very reasonable,” he said.

In an email to 9NEWS, HOA board president Earl Hauserman wrote “unfortunately, the bylaws require us to charge dues and believe me we have looked at any way not to. We are so concerned about this that we have started to raise money to support the families involved and after only a few days we have raised $12,000.”

“It seems to me if you’re raising money for people that lost their homes, maybe you start by not taking money from them and then you raise the money separately,” said Zimmer, who also thinks a situation this unique calls for changing the bylaws.

See also  Working from home? Here’s what you can (and can't) deduct on your tax returns

His priorities are different now because they have to be.

“It’s kind of like losing your past and your future at the same time,” he said.

The legal counsel for the Coal Creek Ranch Master Association told 9NEWS despite the fire, the expenses of the community remain unchanged. The counsel said homeowners must pay those HOA fees until they sell that property to a new owner.

Zimmer and several dozen other homeowners in the association have signed a petition to remove the HOA president and another board member.