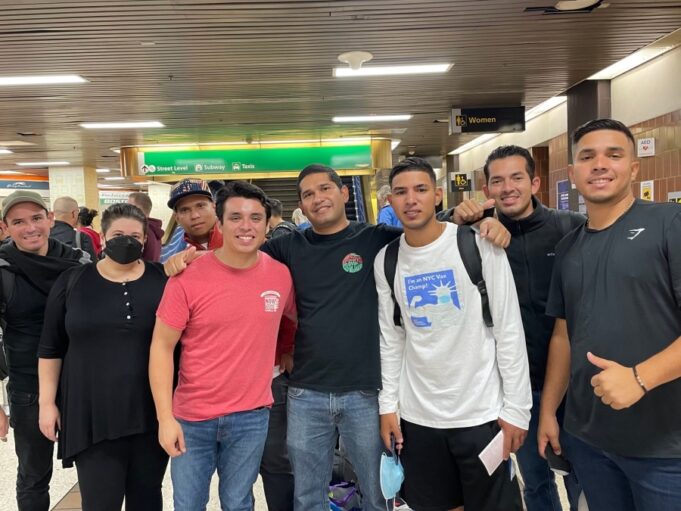 (NewsNation ) — While New York City officials work to provide resources and shelter for the influx of migrants bused to the city , some organizations and volunteers have taken matters into their own hands to help migrants who are left to sleep in the streets.

Individual volunteers are opening their homes to migrants because the city’s shelter system is jam-packed, forcing some migrants out on the street without any resources or shelter.

Long before the first busloads of migrants arrived in New York, the city was already in the throes of a housing crisis.

A slew of post-pandemic evictions had left many families homeless and sleeping in shelters.

On Friday, New York City Mayor Eric Adams declared a state of emergency that said the city’s shelter system is close to 100% occupied after the recent influx of migrants .

The city says at least 17,000 migrants have arrived since May.

“We do everything we can in the most loving manner to ensure people have a safe space,” said Arianda Phillips, an organizer with South Bronx Mutual Aid.

“They don’t have warm clothing, and they’re, you know, in T-shirts and shorts. And the shelter system is not providing them with sufficient food, we hear every single day,” Phillips said.

Phillips said some migrants have been turned away from shelters because of overcrowding, and families with children have been separated.

“So, for example, if they didn’t have a marriage certificate or something to prove familial relationships, they are often separated in the shelter systems,” Phillips said.

She helps those migrants find sanctuary in churches and, more recently, in people’s homes.

“Each sanctuary space is likely doing its best to accommodate with whatever resources they have,” Phillips said.

Two days after arriving in New York, Van Orden said the men who stayed at her home were turned away from a men’s shelter and were left to sleep on the street.

“And they just needed a hand so they could get to Chicago, which was their final destination. And I just thought well my apartment is empty, I’m not using it. And I think I could fit six people if they squish,” Van Orden said.

Van Orden is a volunteer with NYC ICE watch, a mutual aid support group working with migrants. She later invited an additional migrant to stay with her in addition to the six who were already sheltering at her home.

She learned about the men through a chat with other volunteers, and it won’t be her last time opening her home to migrants.

“The vast majority of people coming here are just like you and me. They’re good kindhearted people fleeing from an unlivable situation to save their own lives,” she said.

Van Orden said that before the men left, they made sure to clean up, leaving her space in immaculate condition.

While there are many more volunteers out there like Van Orden, often they choose to move in silence to help the migrants to safety.