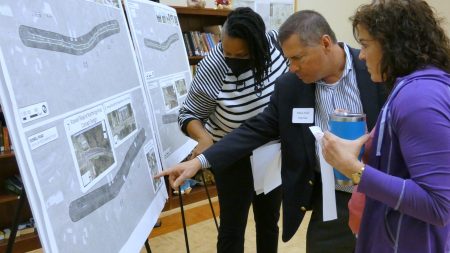 North End community residents who attended an open house on April 26 were glad to see suggested traffic safety recommendations and improvements for pedestrian and bicycle use, though they weren’t sure all the ideas were viable.

“The study is bounded primarily by three main corridors: Roswell Road, then Dunwoody Place and Northridge,” said Keith Strickland of Stantec, the city’s consultant for the analysis. “The city before even advertising the study looked at high crash rate areas all along the city and identified these corridors in the North End area as potential high crash areas.”

Stantec’s final product will be to develop improvements that mitigate some of the crashes. The firm also is looking at multimodal features – for pedestrians, bicyclists and transit – to make safety and convenience improvements, he said.

Before drafting its proposal, Stantec and the city want community input on ideas it may suggest. That started with having residents comment and markup maps showing Stantec’s ideas, along with adding any ideas of their own.

From April 27 through May 10, the city will have the North End Roadway Safety Analysis Study Survey live on its website for residents to add their suggestions and comments.

Among Stantec’s proposals are medians and mid-block crosswalks that would connect more bus transit stops to both sides of Roswell Road. Another idea is to eliminate left turns out of intersections that don’t have traffic signals. Instead, motorists would turn right and make a U-turn a short distance down the road in a planned “R-Cut.”

Shaleah Grice, who lives off Roberts Drive, doesn’t think these U-turns would work that well. Traffic is too fast on Roswell Road and the U-turn locations are too close to the intersections to enable motorists to get across two lanes of traffic to make the turn, she said.

Once the motorist reaches the turning point, the speed of traffic again becomes an issue as a motorist can only drive about 5 mph to make the U-turn, she said.

Strickland said during a short presentation that 30% to 40% of the recorded accidents involved a motorist turning left.

“I like what they’re doing over here moving the intersection at Hope Road and High Tower, so they line up,” said Alyson Foy, a townhome resident in the North End. “I never understood why they weren’t in line or maybe they were just trying to line it up for the entrance in and out of the little shopping plaza and never expecting a road.”

Stantec will finish its study in September. The consultants will turn in two reports, with one on intersection safety and the other on multimodal enhancements.

What to Do if Your Texas Tenant is Keeping an Exotic...