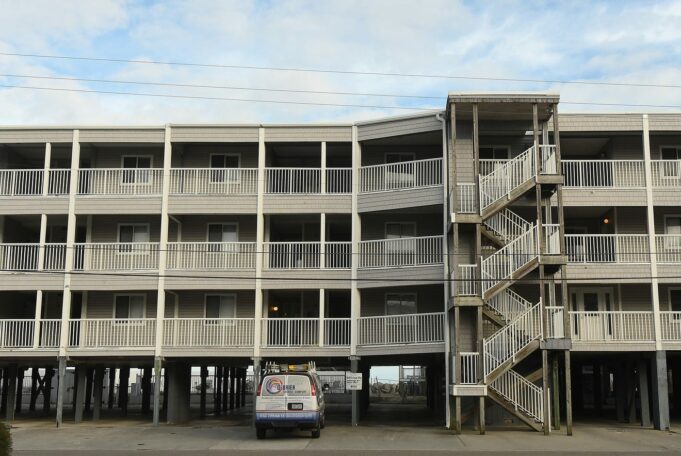 A bankrupt condo complex in Carolina Beach has a new owner.
The winning bid of $8.3 million was made earlier this week by Wilmington-based company Cerka, Inc., according to Rob Tramantano, the realtor handling the sale.
Cerka, Inc. is an industrial contractor that works on bridges, tanks and industrial sites, according to their website.
An auction of the condo complex, which is located at the north end of Carolina Beach, took place Thursday at the U.S. Bankruptcy Courthouse in downtown Raleigh.
According to documents advertising the auction, the two-building complex has 42-units of timeshare condominiums, some of which “boast a spacious, open floor plan with balconies & ocean views.”
“I am pleased to report we had a spirited auction, to put it mildly,” David Haidt, the attorney representing the North Pier Villas Homeowners Association told the presiding judge.
More:On the auction block: Starting bid for bankrupt Carolina Beach condo complex is $3.95 million
More:Carolina Beach growth is driving up water use. Here’s what the town is doing about it.
The North Pier Ocean Villas Homeowners Association filed for Chapter 11 bankruptcy in August 2021. The bankruptcy stemmed from the cost of repairing damage caused, in part, by Hurricane Dorian in 2019 and from a drop in timeshare revenues.
The homeowner’s association has $354,268 in unpaid dues and $32,350 in unpaid special assets, according to court documents.
The starting bid at Thursday’s auction was $3.95 million. Those looking to bid on the property had to submit a bid packet earlier this month to show they had the financial means to buy the property.
The two highest bids will then be submitted to a judge for approval, per bankruptcy court proceedings. The second-highest bid was $8.25 million from Robert Buchanan, according to court proceedings.
Once the final sale order is approved by the court, a closing will occur within 10 days. An order has not yet been filed, according to Clerk of Court Stephanie Butler.
The property is valued at more than $6.1 million by the New Hanover County Tax Department. Ahead of the auction, the property was advertised as a multi-family investment or as a re-development opportunity.
Reporter Emma Dill can be reached at 910-343-2096 or edill@gannett.com.
Source: Star News Online
See also  Parking Enforcement Tips