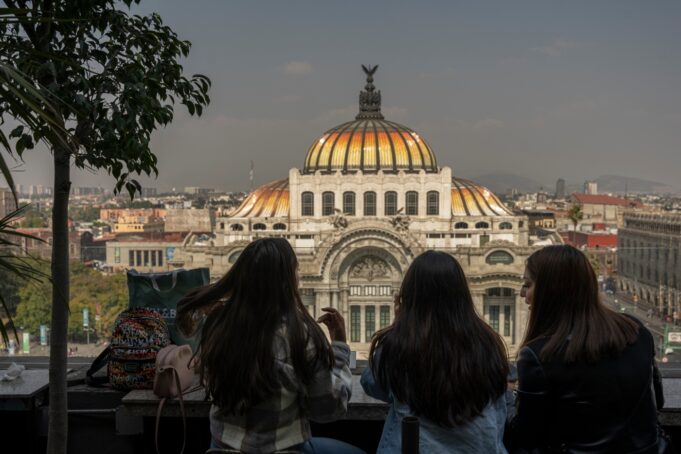 Karina Franco’s ornate Art Deco building in the historic center of Mexico City has long been the heart of a downtown lifestyle, housing families of artists and activists and supporting an ecosystem of street vendors.

But as the pandemic upended office norms, a wave of remote workers from around the world descended on Mexico City, the country’s capital. The flow of foreigners has yet to slow down, causing housing costs to rise, displacing residents and upending the fabric of neighborhoods.

In August, Franco and the other tenants in her building were told by their landlord that their leases would not be renewed. Some units soon appeared on Airbnb — at rates more than four times the monthly rent — and new neighbors, mostly speaking English, now fill the hallways.

“It was very shocking at first,’ said Franco, 47, a migrant rights worker who found a new apartment in a different part of the city. “Then I felt angry.’

Since the pandemic, Mexico City has become a leading global hub for foreigners unshackled from their offices by work-from-home policies and drawn to the kind of comfort a salary paid in dollars or euros can afford.

Between January and October, more than 9,500 permits were issued to Americans allowing them to temporarily reside in Mexico City, according to federal immigration statistics, nearly double the 5,400 issued in the same period in 2019. Many more entered on tourist visas, which allow them to work from Mexico for up to six months as long as they are paid abroad.

The influx has been a boon for business owners in areas popular with foreigners and landlords taking advantage of record demand for long-term stays on platforms like Airbnb. It has also helped Mexicans with spare rooms to earn extra income amid soaring inflation.

But the surge has jolted the already tightening housing market, threatening to make large swaths of the city, where the average monthly salary is $220, unaffordable to many locals.

Mexico City’s leftist mayor, Claudia Sheinbaum, has sought to navigate the changing market by embracing the transplants and partnering with Airbnb on a campaign that promotes the city as a “capital for creative tourism” that encourages foreigners to spend money in less well-off neighborhoods.

But as the jump in American and European visitors fuels a rapid expansion of Airbnb, the mayor’s alliance with the rental giant has ignited an argument that’s enveloped the platform in other major cities, from London to New York to San Francisco, where critics have accused it of driving up housing costs.

Housing activists, wary of gentrification and a shortage of rental housing in the sprawling capital, have accused city leaders of spurring a modern day “colonization” that is pricing out many Mexicans.

Sergio González, a housing activist, said there would be a “big problem” if the city government did not regulate the housing market at a time when remote workers are leading to the “forced displacement of families.”

Amid the backlash, the mayor has acknowledged that American and European remote workers may be putting pressure on housing prices and has directed the city’s housing authority to study the effect of Airbnb.

“The digital nomads are arriving,” Sheinbaum told reporters in November. “Obviously, we don’t want this to mean gentrification or price increases.”

According to Airbnb, between April and June of this year, the number of stays booked in Mexico City on the platform for longer than a month increased by 30% compared with the same period in 2019, making the city one of the more popular destinations worldwide among long-term renters.

In the Condesa and Roma neighborhoods, whose lush streetscapes and dynamic food scenes have long made them attractive to wealthier residents, co-working spaces offering free coffee and cubicles have proliferated.

English speakers pour out of cafes and, on Sundays, cantinas are packed with young people in sports jerseys, the televisions switched from soccer to American football.

The city’s campaign with Airbnb, which is scheduled to fully roll out on the platform’s website early next year, is meant to spread out the crowds. It will promote guided activities, designed with the help of UNESCO, the United Nations’ cultural organization, in neighborhoods that do not typically receive a high number of visitors, according to the company and city officials. Airbnb will also provide information on moving to Mexico, including visa requirements.

Miroslava Miyarath Lazcano Cruz, who has offered tours through Airbnb since 2019, started a new tour on Airbnb in October of Xochimilco, the working-class neighborhood where she lives, that is serving as a model for the program.

The tour includes preparing tamales from handpicked ingredients and floating along the neighborhood’s famous network of ancient canals.

The experience has seen high demand, introducing tourists to the markets and customs of a part of the capital that’s not widely explored by outsiders. Lazcano Cruz said the visitors who have come through Airbnb have “a vision and a thirst to get to know the space in a different way.”

Suvi Haering, a Finnish creative director who arrived in Mexico City in November after two months working remotely in France, said working and living in Mexico “pushes you to challenge your own thinking.”

“It’s the polar opposite of where I come from, hence it’s the most inspiring place I can go to,” said Haering, as she ate at a restaurant in the Roma neighborhood with a friend, a project manager from Denmark, who was staying with her in a nearby Airbnb.

The increase in the number of foreigners living in Mexico City has coincided with a rise in rents. Average monthly rents citywide have jumped from $880 in January 2020 to $1,080 in November, according to data from Propiedades.com, a real estate website.

The uptick has been higher in more upscale neighborhoods. In a slice of Condesa that borders Chapultepec Park, one of the city’s larger green spaces, monthly rents rose from $1,610 in January 2020 to $2,250 in November, driven mostly by the arrival of remote workers, said Leonardo González, an analyst at Propiedades.com.

Many are finding homes on a short-term basis on Airbnb, which is squeezing the available stock of long-term rentals, housing experts said.

Cities around the world, including Barcelona, London and New York, where housing costs have increased sharply, have targeted Airbnb by imposing stricter rules for short-term rentals.

In Mexico, a spokesperson for Airbnb said the company was working with government officials “to be part of the solution to the challenges faced by communities in Mexico City.”

The company also stressed the financial benefits for people who rent out rooms on the platform: More than half of Airbnb hosts recently surveyed by the company in Mexico City said the extra earnings helped cover an increase in food costs driven by inflation.

For Leonor González, the income from an Airbnb she began renting in 2020 in a state that borders Mexico City allowed her to keep paying her employees during the pandemic when her business setting up convention spaces ground to a halt.

Later that year, she also listed a new apartment, a stylish loft in Mexico City, for $71 a night on Airbnb. It’s been booked almost nonstop, González said, usually by Americans working remotely for longer than a week.

“The truth is that there aren’t any locals renting here now,” she said of her Condesa neighborhood. “It’s just foreigners.”

Mexico City officials argue that high housing costs in parts of the capital are the result of years of gentrification that started in the 1980s, when a wave of new construction following a devastating earthquake ushered in younger, deeper-pocketed residents.

“Certainly the fact that a large number of people with higher incomes are arriving in a single area can result in an increase in prices,” she said. “That’s precisely the reason it’s important to show visitors that there are many other areas to discover in Mexico.”

Ximena Gómez Gutiérrez, a 24-year-old who commutes an hour from her family home in a neighboring state to her job at a reproductive rights organization in Mexico City, took part in a recent protest over the new Airbnb program and the city’s lack of affordable housing.

Living near her job and being able to enjoy a vibrant urban lifestyle has long been a dream, Gutiérrez said.

“But my salary isn’t enough to be able to even think about living” in the capital, she said. This article originally appeared in The New York Times.