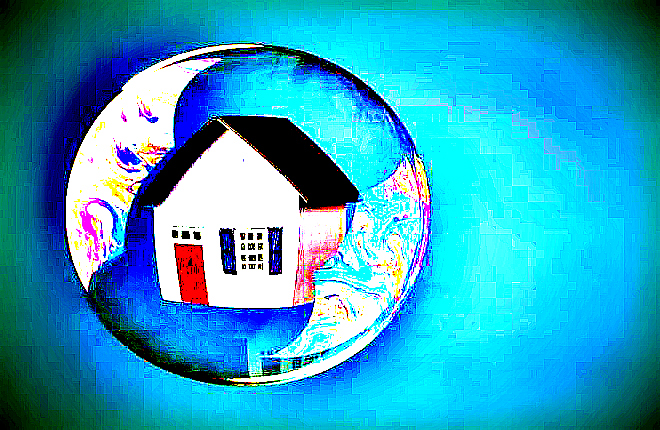 Some housing experts point to the rising participation of investors in the market as a sign that a bubble is brewing. As if home prices in the US weren’t high enough, now they’re getting even more expensive.

Stubbornly low numbers of homes for sale continue to push prices higher and mortgage rates are rising faster than they have in decades. That has put the squeeze on home buyers and the real estate market.

Indeed, some researchers and economists believe the market has begun to show evidence of a housing bubble.

“Our evidence points to abnormal US housing market behavior for the first time since the boom of the early 2000s,” researchers at the Federal Reserve Bank of Dallas wrote in a recent blog post . “Reasons for concern are clear in certain economic indicators … which show signs that 2021 house prices appear increasingly out of step with fundamentals.”

So what does a potential bubble mean for homebuyers and sellers?

The persistent lack of supply in today’s market combined with surging demand is driving up prices and pushing more prospective buyers to the sidelines .

“All the metrics related to income and affordability in housing appear out of sync and the strange movement in the data is really caused by lack of supply,” said Lawrence Yun, chief economist at the National Association of Realtors. “We need to get the inventory up.”

The typical home has seen a 40% increase in monthly payments over a year ago, said Yun, with a roughly 20% increase in home prices and another 20% in higher mortgage rates.

“People’s incomes have not risen to the degree that prices have risen and the cost burden of ownership has been drastically increased,” he said.

This is not sustainable, Yun said, and the result is an increasingly inequitable housing market in which fewer people can own homes and first-time buyers are priced out entirely.

“Prices rising this much is not healthy,” he said. “People associate the American dream with working hard and owning a home and it seems increasingly out of reach or unattainable.”

Housing experts note that the exuberance in the housing market was also fueled by mortgage rates that were too low for too long as a result of the Federal Reserve Bank’s monetary policy.

As rates rise , they say, demand will fall off.

“Rising interest rates from 3% to nearly 5% over four months, that has helped push some competition to the sidelines,” said Mike Maher, co-founder and CEO of Houwzer, a real estate brokerage.

Still, he added, “it is going to be really hard for this bubble to burst any time soon because demand is outpacing supply and even though rates are rising, money continues to be cheap by historical standards.”

One potential benefit of rising mortgage rates, he said, is that the inventory picture may improve.

“What I hope happens is over the next 12 to 24 months is that rising interest rates push some buyers to the sidelines to flatten home price appreciation a bit. Then, potentially, homeowners would move their homes into the market,” he said.

A market bubble can come about when there is a lot of speculation and buyers come in with the intent of selling for more money later. Some housing experts point to the rising participation of investors in the market as a sign that a bubble is brewing.

“I’m moderately concerned about a bubble possibility,” said Arpit Gupta, an Assistant Professor of Finance at New York University’s Stern School of Business. “My concern in housing is that house flipping is up.”

The number of homes flipped by investors in 2021 rose 26% from 2020 and were at their highest levels since 2006, according to ATTOM, a real estate data company.

These investors include “mom and pop” flippers, as well as large real estate companies in the ibuyer business and, to a lesser degree, companies in the single-family rental business who are betting on rising rents.

“That fundamental rise in rents is supporting house prices,” said Gupta. who added that the lion’s share of home sales are still to people using the home as a place to live.

“Investors are betting on a future of increased inequality where a larger portion of Americans are renters,” said Daryl Fairweather, chief economist at Redfin. “They are contributing to that problem by competing against first-time homebuyers and continuing to dwindle the supply in that entry price band.”

While investors aren’t necessarily causing the problem, she said, they are profiting from more than a decade of underbuilding in the US, which has created an environment of low supply and high demand.

But the appeal of these investments may be dwindling.

While the number of flipped homes rose last year, the gross profit margins on home flips in 2021 sank to their lowest level in more than a decade, according to ATTOM.

“There are a bunch of things that are troubling signs that suggest that home prices are getting ahead of the ability of people to live in those homes and afford them,” said Christopher Mayer, a real estate professor at Columbia Business School. “At some point investors have to sell to someone. They can sell to other investors — that’s a bubble. But … eventually houses have to be affordable for the people who live in them.”

Don’t hold your breath for home prices to return to “normal.” Prices aren’t likely to head lower any time soon, according to Fairweather.

“It is hard to imagine prices going down,” she said. “But I think we are nearing the end of the period where homes are going for $100,000 over asking price.”

She was quick to caution that this is not like the last housing crisis, where many homeowners had mortgages they could not afford. “We learned a lot last time and we don’t have those same risks,” Fairweather said.

New lending laws put in place after the housing crisis were designed to better regulate the financial sector and protect consumers. Most homeowners have fixed rate mortgages now, and there are not so many balloon payments to worry about, she said. Also, lending standards are much stricter.

“Current homeowners had to show they have lots of assets to get the mortgage and they have lots of equity,” said Fairweather. “There hasn’t been much predatory lending the way there was before. If anything, there is a lack of access to credit for those who have less-than-perfect credit scores.”

Critically, any shift in the housing market is not likely to significantly impact the wider economy as it did last time, said Mayer. “This should not show up in the financial system, but it will show up in other places.”

While prices might not come down any time soon, they likely will eventually, he said.

“I don’t think the risk is like what we saw from 2008 to 2010 or that prices are going to collapse,” said Mayer. “But it is perfectly reasonable that they could go up in the next year, and then go down. I could see prices being 5% to 10% lower three to five years from now. And you could end up selling for a little less than you bought it for.”

That means those looking to buy now should focus on a home they can reasonably afford and remain in for a while, said Fairweather.

Ultimately, buyers can tame that “fear of missing out” feeling, said Fairweather, by buying a home they can stay in and grow in for the next five years or longer.