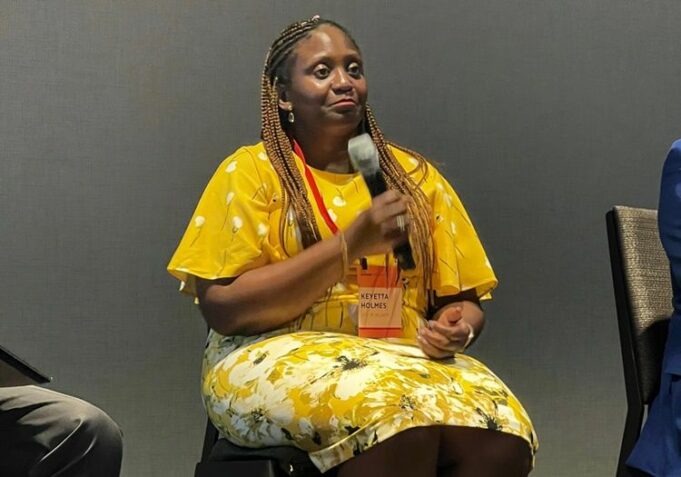 The Atlanta city government under Mayor Andre Dickens is pushing developers to pursue a broader mix of uses — and planning to hold them more accountable for delivering projects that align with what they promised communities in the planning process, Atlanta Zoning and Development Director Keyetta Holmes said at a Bisnow event last week.

Holmes said the city plans to “hold developers’ feet to the fire” on what sort of amenities and benefits are actually built.

“Just be honest with the residents,” Holmes said during Bisnow’s construction and development summit Aug. 10 at the Westin Peachtree Plaza.

The city is also looking to ask developers to include more of a mix of uses in residential and office projects or amenities, signaling an intent to get involved in the development process at an early stage.

“I think that push hasn’t always been there. We just kind of let developers develop,” Holmes said. “Now it’s about the really dirty details about what you’re providing.”

Some developers said they have already felt the change in the city’s approach.

“I think the city of Atlanta has really been focused on ensuring on development properties that [they] have the right amenity mix,” said Shaun Belle, the founder and president of CMC Development, which has projects across the Southeast and in New York City. “And [the city is] not simply saying that, as a developer, we’re going to do certain things, but ensuring that not only we’ve delivered them, but they’re of high quality.”

Holmes and other panelists said developers need to collaborate with local community leaders on the designs of new mixed-use projects. Jeff Garrison, a principal with SJC Ventures, said his firm added a hotel and interior streets with sidewalks to its Interlock project in West Midtown based on community feedback.

“Our first site plan for the Interlock didn’t include a hotel. That was all community feedback,” he said. “We had 50 meetings associated with the design of Interlock. And, by the way, it’s a better project for it.”

Portman Holdings Senior Vice President Charles Pinkham said developers who pursue retail as part of their projects need to know what residents in the neighborhood really want and need out of a new project. Without that knowledge, the developer is risking the project’s failure.

“Community is what’s going to activate your retail, so understanding what they need, what they’re going to engage with, is very important,” Pinkham said. “When you’re going into retail, you’re not just going to build blank boxes and then hope people come fill it. Understanding what the community needs, frankly, is not just what do they think of this design.”

Atlanta is chasing more density as the region grapples with housing affordability, and part of that entails more square footage that is devoted to nonresidential space in residential projects, Holmes said.

“We’re looking for you to exercise all the density that is offered to you,” Holmes said.

Panelists said the increased scrutiny among city officials needs to be balanced with the economic reality of mixed-use development.

For developers, the ability to build denser projects becomes attractive as land prices in the city continue their skyward march, interest rates have risen, construction labor is still hard to come by and the economy feels more uncertain. Those factors are also forcing developers to huddle with their general contractors and designers earlier to secure costs.

Other business practices have changed as the industry begins to operate with a pandemic as the norm, including offering more perks to construction workers, buying and storing construction materials upfront to control costs and learning to do the same amount of work with fewer people, panelists said.

Holder Construction Co. President Beth Lowry said the costs, labor and supply chain issues have her firm being more choosy on the projects they bid on.

“We’re not designed in this industry to have 20% [cost] escalation year-over-year, but that’s where we are. Right now, we have to have so much certainty in that relationship,” Lowry said. “We’ve had to say no to a lot of work where we know that owner is going to be extra difficult or we don’t know that owner, but we can’t afford to try that out right now.”

The added uncertainty has made developers more choosy on the sites they select for projects, Garrison said. Even with a Midtown address, it’s possible that a developer with a site that has less-than-ideal access or demographics could make a bet that doesn’t pay off.

“You see this as the boom continues: People start to take on projects that are just a little bit off the mark,” Garrison said. “That’s where you get into trouble. You spent a lot of money now, you’re a million and a half dollars in pursuit of a deal that’s an A-minus deal. You feel like you got to move forward, and now you’re stuck with four years of energy tied up with a mediocre deal. So to me, let’s focus on the A-plus.”

Despite the challenges, panelists said demand for new housing in mixed-use projects continues to rise in the city, even as investors become more gun-shy about the state of the U.S. economy.

“Can our equity partners, who are actually paying for these projects, are they able to raise capital behind this? If they still can, if their private investors think it’s safer to put it into a private equity fund that can fund these types of projects instead of putting it in the stock market, I think we’re going to be just fine,” Franklin Street Senior Vice President Nick Sanfilippo said. “As of now, they can. The demand is there. We’re making deals. I don’t see us pulling back.”