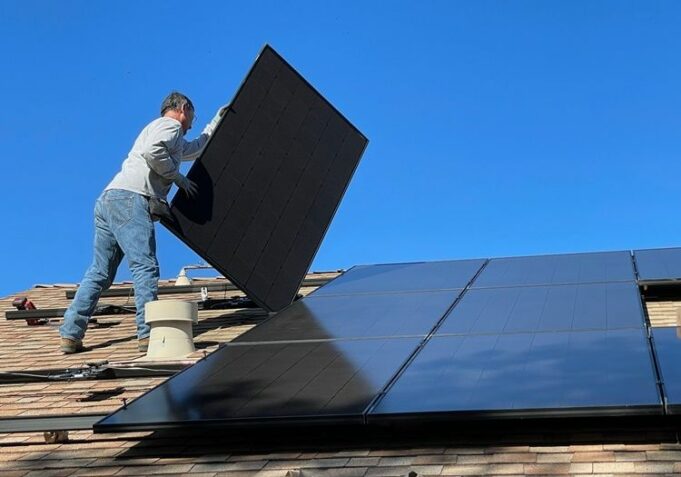 State officials met with representatives of a German company that is eyeing a manufacturing facility in Georgia to produce solar modules, including wafers, frames, racks and battery systems, according to approved minutes of the June 2 meeting of the general session of the state board of the Technical College System of Georgia.

During an external affairs and economic development discussion, Winton Machine Co. CEO Lisa Winton said at the meeting that officials with the state’s Quick Start program met with representatives of the unnamed company to discuss the project, according to the minutes. Quick Start is an incentive program within the technical college system that formulates specialized training programs for manufacturers to ensure a pipeline of labor.

Winton was appointed by Gov. Brian Kemp in 2019 as the 7th Congressional District representative to the system’s board, which establishes standards, regulations and policies for educational institutions. She didn’t respond to Bisnow’s requests for comment.

Baoky Vu, the head of Atlanta-based Forthright Partners and the 4th Congressional District representative on the board, acknowledged to Bisnow in a message that “negotiations are still ongoing,” but declined to comment further.

Winton said at the June meeting that Georgia Quick Start representatives also are in talks with a cardiac monitoring device maker that is looking to land in Metro Atlanta, bringing with it 400 new jobs.

The law, the largest federal package of climate spending to date, includes $60B to grow U.S. renewable energy infrastructure manufacturing, including $30B over the next 10 years to encourage domestic manufacturing of solar panels and components, wind turbines, inverters and batteries for electric vehicles and the power grid, according to an August analysis by the Congressional Joint Committee on Taxation.

“These provisions, which allow government support to increase as production volumes rise, are expected to significantly expand solar manufacturing in the United States, including wafer and cell manufacturing where China has a near monopoly on global manufacturing,” Wiley Law partners Timothy Brightbill and Laura El-Sabaawi and associate Paul Devamithran wrote in a blog post analyzing the law’s impacts.

John Boyd, the principal of corporate site selection consulting firm The Boyd Co., said economic development professionals expect a burst of activity among solar manufacturers, particularly in Georgia, which is viewed as having a pro-business climate.

“Add solar panel production to the list of new growth industries that our country is embarking on,” Boyd said. “We’ve had several related solar panel data requests over the past several months, so we’re obviously seeing an uptick.”

Two other solar equipment manufacturers were scouting Georgia for new manufacturing plants, but those deals were put on hold after talks on Biden’s initial Build Back Better bill fell apart, a source familiar with state economic development told Bisnow. Now that a stripped-down version of the law has been signed with incentives for solar production, the state expects activity to pick back up.

Earlier this year, South Korean Hanwha Group announced plans to invest $171M in a new solar module facility for its Qcells division that would employ 470 people in Dalton, Georgia, more than 80 miles north of Downtown Atlanta. Qcells already operates a solar panel facility in Dalton that makes 12,000 panels a day, according to the governor’s office.

With the IRA passed, Qcells is now looking at other sites in the state for additional manufacturing capacity, the company’s head of marketing and public affairs recently told The Atlanta Journal-Constitution.

Solar companies will gravitate to Georgia and the Southeast for many of the same reasons electric vehicle companies have flocked to the Peach State, Didi Caldwell, the founding principal of Greenville, South Carolina-based Global Location Strategies, told Bisnow. Those reasons: plentiful land, talent and cheap electricity.

Caldwell said the U.S. was on the path to becoming the dominant solar panel maker in the early 2000s until Chinese factories dumped lower-cost panels produced with cheap labor on the market, strangling the nascent domestic industry.

One example is Hemlock Semiconductor, a firm that makes photovoltaic coating for solar panels. In 2008, the company announced plans for a $1.2B plant in Clarksville, Tennessee, backed by more than $340M in state and county incentives.

By 2013, before the plant was set to open, Hemlock laid off 400 of its 500 employees there. By 2014, the company scuttled the plant altogether, with Denise Beachy, then the company’s president, blaming the closure on economic and geopolitical circumstances.