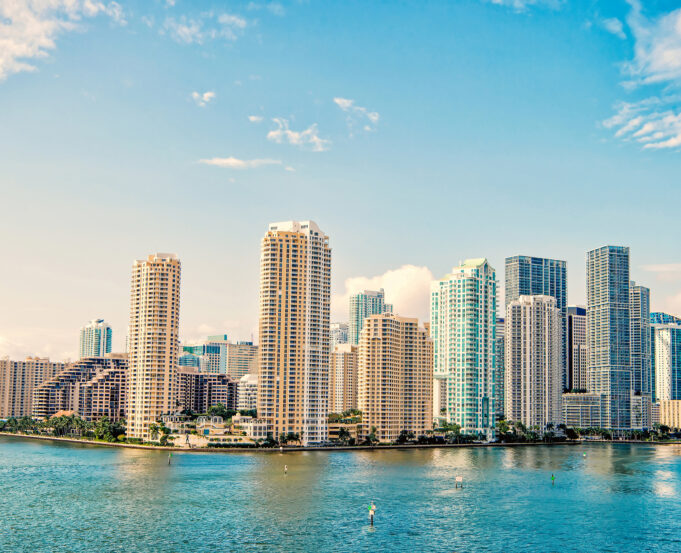 Condominium developments that allow owners to rent their units have multiplied in Miami, promising to turn the city’s urban core into a hub of high-rise home sharing. Speedy pre-construction sellouts of these niche developments suggest the market for rental-ready condos remains underbuilt in Miami.

In just five months, for example, Related Group reserved all 343 of the fully furnished units planned for District 225, a condo development in the West Brickell area that the Miami-based company has designed and promoted in collaboration with Airbnb, the dominant home-sharing platform. A website for the 37-story development in downtown Miami urges viewers to, “Live at District 225. Host at Airbnb.”

“We were expecting that we would be 40 to 60 percent sold in five months. We caught lightning in a bottle,” said Eric Fordin, a managing director at Related Group, which in late January was preparing to start construction of the condo’s foundations.

“Related has a license agreement with Airbnb. We basically designed the amenities and the operations for the building to work symbiotically with Airbnb,” Fordin said. Going through Airbnb to rent a unit at District 225 will be optional, though the system is designed to function seamlessly with Airbnb, he said. Compared to typical buyers of South Florida condos, the buyers who have deposited money to reserve units at District 225 are younger, and a larger than usual percentage of them are American citizens, Fordin said. Pre-construction sale prices range from $300,000 for studios to $800,000 for two-bedroom units.

“This is definitely catering to a new type of buyer in South Florida,” he said.

Related Group also plans to cater to that type of buyer with another home-sharing development in Miami. In partnership with Fort Lauderdale-based Merrimac Ventures, Related is developing The Crosby, a 33-story, 450-unit condominium without rental restrictions at Miami WorldCenter, a master-planned, mixed-use development spanning 27 acres in downtown Miami. Buyers will be able to rent the furnished units on any home-sharing platform as often as they want. Pre-construction sales began in January, with prices starting in the $300,000s.

Other condo projects with liberal rental rules include Smart Brickell, a three-tower development under construction just west of Miami’s Brickell Avenue financial district. Smart Brickell will have nearly 300 furnished units that owners can rent up to 50 times a year through such platforms as Airbnb, Sonder and Vrbo. Miami-based developer Habitat Group launched pre-construction sales for the third tower in December 2021 after selling out the first two towers. Prices start in the mid-$400,000s.

Miami Beach once charged $20,000 for the first violation of its short-term rental rules. But in July 2020, an appellate court upheld a lower court ruling that the city’s steep fines violated state laws that limit the dollar amount to $5,000 or less. “They were getting a lot of cases where buildings that were meant to be apartments were actually becoming transient-use hotels, and it was leading to a lot of problems. So, that’s why Miami Beach did what they did,” said Joseph Hernandez, an attorney with Weiss Serota Helfman Cole + Bierman.

Some Airbnb hosts in the Miami area comply with government regulations of short-term rentals but violate condo association rules that prohibit them, Hernandez said. He represents the owners’ association at a 250-unit condominium on Miami Beach where many of the units are listed for rent on Airbnb despite association rules that prohibit the practice. “If you looked on Airbnb’s website, of the 250 units, you could probably see 40 or 50 of them advertising right out in the open,” he said without identifying the condo. The fines the outlaw owners pay to the association for condo-rule violations are so small that “they are making more money renting than they are having to pay in fines.”

Developing a high-rise condo from the start with liberal short-term rental rules can minimize conflict among neighbors, Fordin said, citing Related’s District 225 project. “It’s essentially an Airbnb community, right? Everybody knows what they’re getting into from the onset — as opposed to someone who bought in a neighborhood that is supposed to be all neighbors living next to each other,” he said. “You see and read that neighborhoods are under attack by all these corporations that are buying homes that become Airbnbs and destroy the fabric of neighborhoods. I would say the opposite is true for a property like this, that is truly designed to be an Airbnb.”

Condo developers initially set rules for renting units, which associations of owners can vote to perpetuate. “Historically, in Miami condominiums, you typically can rent twice a year, max, and that’s how they restrict how much you can rent that unit,” said Ryan Shear, managing partner of New York City-based Property Markets Group (PMG), a national real estate development, investment and asset management firm.

Some developers in Miami are opting for condo projects that allow owners to rent their units for a minimum term of 30 days, or a maximum frequency of 12 times a year.

For example, PMG is co-developing condominium units at E11even Hotel & Residences, a two-tower project in downtown Miami pairing a condo and a condo-hotel, where condo owners who rent their units will have to do so for at least 30 days per booking. “They’re both condos. One tower has a rental program, and you can contribute your unit into the rental program, so it functions as a condo-hotel,” Shear said. “The other tower is just a straight condo that allows people to rent. But it’s a minimum [term] of 30 days.”

From November of last year through January, buyers reserved about 230 of the 460 condo units planned for E11even Hotel & Residences. Nearly all the 411 condo-hotel units were reserved in the first half of 2021. “I expected this to go well, but it’s gone above and beyond what I imagined,” said Shear. “It did exceed my expectations.”

Asked if developers are planning too many ready-to-rent condos in downtown Miami, Shear replied, “There’s so much demand now, I think we’re a little underbuilt, frankly … That’s an underserved market that you’ll see grow.”

In late January, buyers had reserved about 110 of the 228 units planned for The Standard Miami Residences. Located in the Midtown area just north of downtown Miami, the condo building will allow owners to rent their units for a minimum term of 30 days. “We won’t do short-term rentals. The whole idea is to create a sense of community and not have a lot of people coming in and out,” said Carlos Rosso of Rosso Development, the developer. “This is not a daily rental building.”

By requiring stays of at least 30 days per rental booking, Rosso said, The Standard Miami Residences will sidestep a surge of condo developments in downtown Miami that will allow short-term rentals. “There’s around 5,000 units being developed all at the same time in Miami for short-term rentals, which equates to 20 hotels with 250 rooms each,” he said. “They’re also concentrating in the same location, which is downtown Miami. They’re going to push the rents down … We are not trying to go after that market.”

The Standard International hotel group boosted pre-construction sales by putting its brand on the residential property. “People feel comfortable that it’s going to be a branded building, that there are going to be certain standards and rules,” Rosso said. Most of the reserved units are held by New Yorkers “who are familiar with the brand and like the price points.” Unit prices in the preconstruction phase started at $400,000 and topped off at $900,000.

Rosso plans to start construction by the third quarter of this year and finish in 18 months. “It’s a relatively short building, 12 stories, so it’s going to be fast construction — which is also why some people are attracted to this building,” he said.

Under construction since 2020, Natiivo Miami will be one of the first in Miami’s new wave of ready-to-rent condo projects to open for occupancy. The 50-story, 604-unit condo in downtown Miami is expected to open in late 2022. Prices for most units (excluding penthouses) have ranged from the mid-$300,000s to $1.2 million. The developers are Miami-based Newgard Development Group and Crescent Heights co-Founders Russell Galbut and Bruce Menin.

As 2022 began, Newgard had spent just eight weeks gathering reservations for half the 364 units planned for LOFTY Brickell, a 42-story rental-friendly condo project in the Brickell Avenue corridor just south of Miami’s central business district. Pre-construction prices for units in the building bearing Newgard Development’s new, high-end LOFTY brand started at $493,000 for studios, $660,000 for one-bedroom units and $794,000 for two-bedroom units.

Harvey Hernandez, the CEO and founder of Newgard, acknowledged the growing number of Miami condo developments unrestrained by rental limits. “We already see a ton of developers looking to kind of imitate what we do, starting with Natiivo and now with LOFTY,” he said. Newgard Development is trying to distinguish itself from competitors by managing the branded properties it builds and operating its own home-sharing platform. “Every property that we build, we have management and technology in place,” Hernandez said. “We are not in the business of just selling the real estate and moving to the next property. We are in the business of staying with our buyers forever. That’s a big difference.”

The trend may spread to the rental side of the multifamily property market throughout South Florida.

Some investors are subleasing rental apartments in South Florida and offering them as short-term rental units, said Kyle Morgan, an attorney in Fort Lauderdale who has represented such investors. “One client we had entered into a lease of a whole floor, six units, and then they would sublease those units for short-term rentals through their platform,” Morgan said. “It’s a sublease model.”

Airbnb is seeking affiliations with rental apartment owners and developers willing to allow tenants to rent their apartments on home-sharing platforms, said Jesse Stein, Airbnb’s San Francisco-based head of global real estate. Stein said Airbnb plans to replicate its involvement in the District 225 condo development, a first for the company, in similar affiliations with rental property owners. “We are actively working on a number of deals in South Florida in the rental space as well as the for-sale space,” he said. “They’re not public yet. But you will see a significant push to let tenants offset their rent by hosting.”