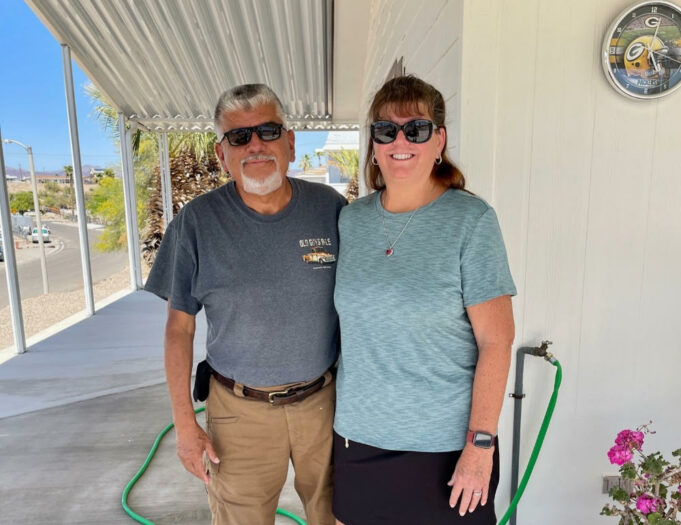 Residents were without any water for nine days and still lack potable water because a pump operated by a financially ailing water company was knocked offline by a power outage. Paul Rivera and his wife, Melissa, bought a doublewide at Havasu Lake in 2004, planning to eventually retire to the community on the eastern edge of California.

The couple often would travel from their home in Yorba Linda to their Colorado River playground for weekend getaways. Paul Rivera built onto the property, adding a garage, an awning, concrete walkways and a patio.

Havasu Lake resident Gary Chamberlain loads pallets of bottled water onto the back of a pickup on Friday, April 8 for delivery to community residents who have been without drinking water since March 21. (Photo courtesy of Gary Chamberlain)

When the Kimberly-Clark manufacturing plant in Fullerton — where Paul had worked for 42 years and Melissa for 38 — closed permanently in 2019, the Riveras found themselves retiring early.

In October 2021, the couple sold their Orange County home and moved to Havasu Lake permanently to enjoy a relaxing life along the Colorado River. But only six months later, they found their idyllic retired life disrupted by a crisis that left them and 300 other residents without water.

On March 21, the water supply was cut off when a pump failed after a Southern California Edison power outage. The Havasu Water Co., the area’s supplier, did not have operable backup generators to keep its decrepit pump working.

That was a particular hardship for Rivera and his wife, who care for her mother, who is 82, and stepfather, who is 96. Both suffer from dementia and need continual supervision. Without a water supply, they were giving his in-laws sponge baths.

“It’s very frustrating. I’m trying to be nice about it,” said Paul Rivera, 62.

It took nine days before the water supply was restored, but only for showers and toilet flushing. As of Friday, April 8, the residents were still without potable drinking water.

Rivera was indifferent when asked if he was concerned about showering with unfiltered water.

“As long as there is soap and water, I think we’re OK, but I don’t really know for sure,” he said. “I never tested the water to see if there’s anything biological in it.”

Some residents are wary of showering, even though they can now do so.

On March 29, the State Water Resources Control Board slapped the water company with a compliance order, citing a dozen violations of state codes and issuing 15 directives with specific deadlines for the company to get in compliance, or face fines of up to $1,000 a day.

Patrick Webb, the attorney representing Havasu Water Co., blamed the problem on the power outage, caused by a broken power pole, and one of the company’s former operators recently walking off the job, preventing the company’s 100,000-gallon supply tank from being filled.

“The tank has been refilled, and (Havasu Water) is awaiting clearance from the water boards, which is anticipated shortly,” Webb said in an April 4 email.

During a March 22 sanitary inspection at the water company site, state water board engineers found the plant to be “in a state of extreme disrepair,” according to the compliance order.

Residents say that despite the water outage, they still received their monthly water bill of more than $80.

Webb, who would not comment on why the water company’s equipment was allowed to deteriorate, said the company is investigating whether there is any connection between the water outage and the former employee’s “sudden departure,” and that the company has reached out to the Chemehuevi Indian Tribe for assistance.

Residents said the neighboring Chemehuevi tribe, which has its own water system, has been very accommodating in allowing residents to use the showers at its Havasu Landing campground.

The Water Board concluded that Havasu Water Co. has been unable to provide “pure, wholesome, healthful, and potable water” to its customers and does not have certified treatment operators to run its plant, according to the compliance order.

“It can’t last much longer”

One of the water company’s former operators, Theodora “Teddye” Goodgame, explained in a March 4 email to State Water Board Engineer Hector Cazares that she left her job because her wages had been cut to $800 a month. She said the other operator she worked with was being paid $50 a day to run the plant.

Goodgame said the water plant had fallen into such disrepair and was so financially strapped that she had no choice but to leave.

“The condition of the plant just keeps getting worse and worse. It can’t last much longer,” Goodgame said in her email, which was included in the compliance order. “I close my eyes and pray every time I draw water out of that old pressure tank. … In spite of the rate increase, there hasn’t been a penny put into it.”

Goodgame said in her email that water company CEO Jennifer Hodges told her there was “no money in the bank.”

Hodges, who did not respond to repeated telephone calls and emails seeking comment, has been mired in Chapter 11 and Chapter 7 bankruptcy proceedings since July 2021. She listed assets of $4.2 million in real estate and personal property, including a sprawling ranch in San Miguel valued at $4 million, a 2017 Range Rover HSE valued at $35,000, and a 2014 Mercedes E250 Blu Tec valued at $15,000.

She detailed more than $4 million in liabilities, according to the bankruptcy filing.

For more than a decade, the Havasu Water Co. has been in a prolonged legal battle with the Chemehuevi Indian Tribe over a 1,500-foot-long easement running through Chemehuevi land that the federal government initially granted the water company rights to in 1976.

Havasu Water Co. needs the Chemehuevi land to run its pipeline to supply water to its customers, and also has its water pump on Chemehuevi property.

The tribe maintains that the water company’s lease with the federal government expired in 2006, and that it needs to renegotiate its lease with the tribe before it can use the tribal land for the pipeline.

See also  'I feel angels are good for you': Senior fights HOA over angel statue

But Havasu Water Co. has not been agreeable to a renewed lease with the tribe, and has not paid a cent to the tribe for use of its land since 2006, said Lester Marston, the tribe’s lead attorney on the case.

A mandatory settlement conference is scheduled for April 28 in federal court.

Among the 15 State Water Board directives, Havasu Water Co. must meet four of them met by Tuesday, April 12:

Have two certified operators in place at the water plant.

Be in compliance with drinking water standards and surface water treatment requirements.

Have operable backup generators on site.

Prepare a corrective action plan for water board approval.

Additionally, by April 15 the water company must verify that its system has functional equipment such as filters and chlorine analyzers.

Webb did not respond to questions asking if the company believes it will be able to meet those directives by the deadline dates.

If Havasu Water Co. fails to meet state directives, the State Water Board can issue further enforcement actions with fines, district engineer Wei Chang said in an email. He said the water board is working with the California Public Utilities Commission, which also regulates the water company and therefore has the power to take enforcement action against the company.

“A last resort would be for the State Water Board to request a court-appointed receiver assume operations of the water company, however, obtaining a receiver can be a slow process,” Chang said in the email.

Chamberlain’s husband, Gary Chamberlain, 73, has been assisting local residents in need and volunteering at the local fire station and community hall, where the county has been delivering pallets of bottled water.

On Friday, Chamberlain spent the better part of the day using a forklift to move pallets from a fire station bay, where the water was delivered, to the neighboring community hall.

Before water was restored for showers and toilet flushing, Chamberlain said he would venture down to the lake’s boat ramp every morning and scoop water with a 3-gallon bucket, then take it to residents needing water to flush their toilets.

“It’s not only been an inconvenience but it’s stressful,” he said. He said one of his biggest concerns has been fire hydrants, and what would happen if a fire erupted with no water for the hydrants.

Thankfully, the hydrants were replenished on March 30 when water was restored for showers and toilets.

The upside to the crisis is that it has brought out the best in the community. Residents have been pulling together to help each other out.