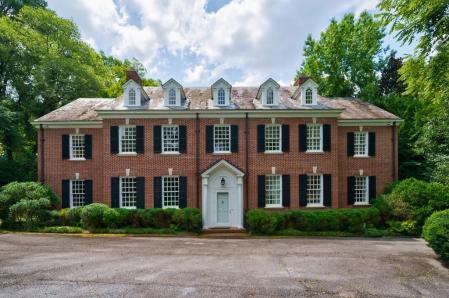 The house at 660 West Paces Ferry Road, known as Whispering Pines and built in 1928, could be demolished as part of a developer’s plans to build an 8-house subdivision on the property. (Special)
The fate of a nearly century-old home along Buckhead’s historic West Paces Ferry Road remains up in the air as a developer moves forward to build a new subdivision on the site.
An affiliate of the Macallan Group, an Atlanta-based construction and real estate firm, purchased the home and the roughly four acres its sits on at 660 West Paces Ferry Road NW for $3.3 million in December. The company wants to build a cul-de-sac with eight new houses on the property near the Northside Drive intersection. Doing so could mean razing the stately mansion built in 1928 and known by many as Whispering Pines.
Residents living in the surrounding affluent neighborhoods, including West Paces Ferry/Northside, Chastain Park and Tuxedo Park, as well as the Atlanta Preservation Society, have been in talks with the developer for several months to try to find a way to save the house. They say it represents a slice of Atlanta’s history and culture and should be incorporated into the new subdivision development.
Construction on the subdivision is expected to start this summer, but a decision still remains on what to do with Whispering Pines.
“The Macallan Group is working closely [with the residents] to determine a way to preserve the house on the property, but there is not a solidified plan at this time,” the company said this week in a prepared statement. “The Macallan Group has presented several plan options and are diligently working together to find a beneficial solution for all parties involved.”
Designed by renowned architectural firm Pringle and Smith, Whispering Pines was the longtime home of Harrison Jones, chair of the Coca-Cola Company in the 1950s, and his wife, Kathryn. It is one of about 24 houses on West Paces Ferry that are about a century old but have no historical protections.
The 7,000-square-foot house is hidden from the now bustling corridor behind a grove of trees and a white picket fence. It includes a swimming pool and a vast garden. House and Garden magazine in 1929 compared it to George Washington’s Mount Vernon.
David Mitchell, executive director of the Atlanta Preservation Society, is working with residents and the developer as they negotiate a way to try to preserve the home and find a sustainable future for it, he said.
“The West Paces Ferry corridor becomes between World War I and World II a really unique and unparalleled space in the city of showing the rise of a certain genre of North Atlanta that is still in existence today through the architecture,” Mitchell said.
West Paces Ferry Road was also home to many philanthropists and created a component of Buckhead known for its regal homes sitting on lush, large lots, Mitchell said. The families not only built extravagant houses to live in but also contributed their wealth to the entire city of Atlanta. That is history worth preserving, Mitchell said.
“When you say Buckhead, it’s defined by West Paces Ferry corridor,” he said.
While change is necessary in any thriving city, developers can also respect the history and culture of a community it plans to redevelop, Mitchell said. Buckhead and West Paces Ferry Road represent a time in Atlanta’s history that can still be experienced through its architecture and homes, for example, he said.
“There’s a certain level of stewardship, of responsibility,” he said.
Source: Reporter Newspapers & Atlanta Intown
See also  Georgia Mortgage Assistance Program