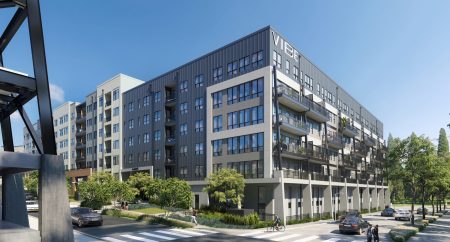 A 292-unit apartment building called Vibe is under construction at the mixed-use Echo Street West development on the Westside. According to a press release on the project, 20% of the units will be listed as affordable at 80% area median income (AMI). Project developer Lincoln Property Company said the rise in jobs and investment from tech companies, such as Microsoft’s forthcoming Westside campus, as the key driver for apartment demand in the area.
Amenities at Vibe will include a “maker’s room,” pet spa, podcast studio, and nearly 4,000 square feet of rooftop space. Vibe will also has numerous entries and exits as part of Echo Street West’s “no front door” concept, integrating the resident experience with the rest of the development’s retail, restaurants, entertainment, greenspaces, and the Atlanta BeltLine.
Pre-leasing will begin later this summer with first resident move-ins slated for the end of the year. Visit Echo Street West’s website for more information.
Source: Reporter Newspapers & Atlanta Intown
See also  Cathedral City Case Limits HOA Authority Over Short-Term Rentals