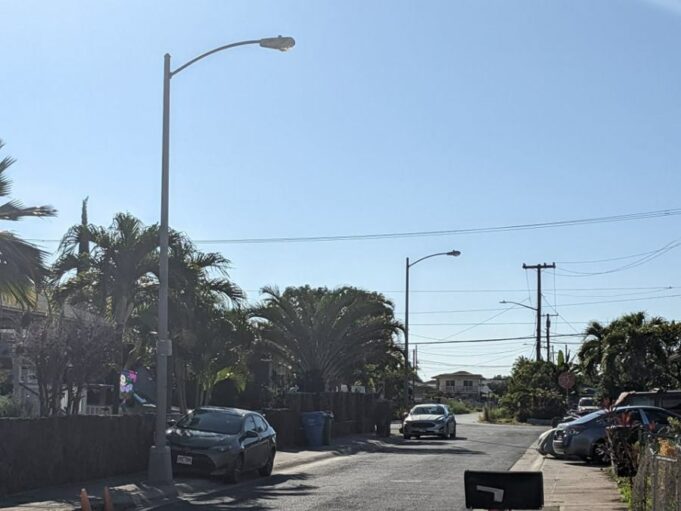 HONOLULU (KHON2 ) – When a Maili couple went through their mail recently, they didn’t expect to see a bill from the Hawaiian Electric Company (HECO) saying they owed almost $18,000 – to pay for their neighborhood streetlights. In a letter dated Jan. 27, 2022, HECO said it has been reviewing its established streetlight accounts for streets located on Oahu since 2020.
“During the review, Hawaiian Electric learned that several of these accounts did not have an existing customer,” the letter stated. “One such account relates to the streetlights that are found within the street at Halemaluhia Place.”
No evidence COVID vaccine led to teen’s death, probe reveals
“Yes, I was shocked, overwhelmed and confused, but still remained hopeful that there is some solution to this,” said Desha-Ann Kealoha. “My husband has a colorful vocabulary – he was upset.”
Initially, HECO believed the street had been dedicated to the City and County of Honolulu. However, in a correspondence dated in November 2020, the City denied the street was dedicated.
“Hawaiian Electric recently learned that you both own Halemaluhia Place…” the letter continued. “Because you own the street upon which the streetlights are located, Hawaiian Electric believes that you are responsible for the payment of electric energy supplied to these streetlights.”
Read the letter below:
Desha-Ann said their home was the only one to receive this letter.
“The other neighbors have heard that our house owns the road as well, but have never heard about HECO looking for payment to public streetlights,” she said.
Her neighbors were the first to find out when they called HECO to repair a streetlight that went out. According to her neighbors, HECO told them it was a private road and they couldn’t repair it.
Desha-Ann said that nowhere in her mortgage documents does it say that her and her husband signed to purchase the whole street. She has reached out to her realtor, who in turn reached out to the escrow office. HECO is also looking into the matter and released this statement:
“We’re working with all parties and have spoken with the Kealohas. We want to assure them that we don’t expect them to pay the outstanding bill. Our goal is to determine who owns the street where the streetlights are located so that the bill can be paid going forward.”
Shannon Tangonan, HECO spokesperson
“That is definitely a common goal that I hope can be resolved as well!” Desha-Ann said in response. “Failure for the developers to complete the dedication process should not be my issue. Not sure who dropped the ball here, but it’s out of my control.”
Since 2020, HECO has been researching for the correct owners. While the Kealohas won’t have to pay the five-figure bill, HECO still needs to figure out who to send payments to. They hope there’s a solution not only for themselves but for other roads nearby that need improvements.
“As I ask more questions, homeowners that have lived in my neighborhood for years are starting to educate me on a longtime issue that Maili has always had,” Desha-Ann explained.
She said homes are developed with a major lack of infrastructure, cutting corners and then getting away with it by pawning off “private roads” to homeowners.
“I’m basically trying to draw a roadmap for myself on how to correct this whole thing,” Desha-Ann said. “Because there are other roads just like mine in my neighborhood that have homeowner names listed as the owner – my guess is they aren’t even aware of it.”
Shared from Pix 11
See also  AG Stein sues contractor who allegedly scammed local residents after Hurricane Florence