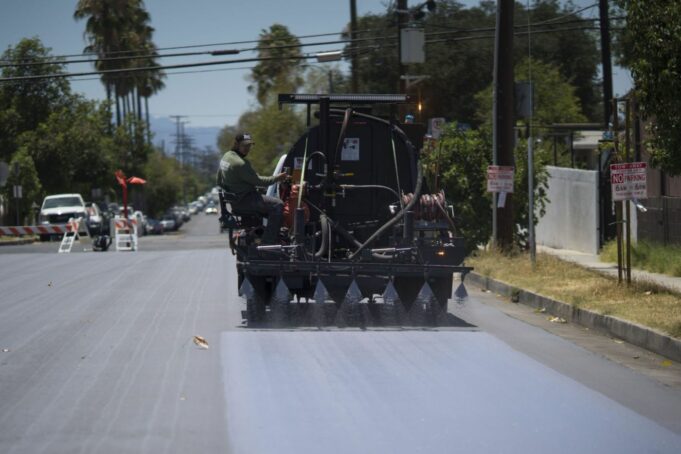 As temperatures hit triple digits on a blue-sky July day in the Los Angeles community of Pacoima, families escape the heat at a local park. Many of the surrounding homes lack air conditioning, and the neighborhood’s sparse stands of towering palm trees provide scant shelter from the sun. The streets are scorching, with the asphalt radiating 127° Fahrenheit of heat at noon, according to a temperature reading. An hour later, it rises to 141.8°.

“It’s super-hot here,” says Jeniffer Ramirez, who lives across the street from Hubert H. Humphrey Memorial Park. “We used to have a fall, a spring, a winter. Now it’s just like summer the whole year and it doesn’t cool down until after midnight.”

It’s so sweltering that Ramirez won’t start selling slushies and nachos from the multi-colored food truck parked in her driveway until later in the day. “If I take it out right now with this heat, my generator will blow,” she says.

Relief is coming, though, from a work crew spraying a gray-blue material on the street in front of her house. The epoxy acrylic coating made by roofing giant GAF reflects solar infrared radiation that normally would be absorbed by the asphalt. After a second layer is added, the pavement will be gray in color, in contrast to the current black. The coating is being applied to nearly 1 million square feet of roads, playgrounds and parking lots in a 10-block-area around the park.  About 7,300 people live within a half mile.

Melanie Torres and Gabriel Carrillo, both from the organization Pacoima Beautiful, walk on reflective pavement coating applied to a street, a parking lot a school playground in Pacoima, California, on Tuesday, July 19, 2022. Photographer: Eric Thayer/Bloomberg

The first-of-its-kind project aims to lower the ambient air temperature in Pacoima — a lower-income, primarily Latino community — as climate-driven heat waves become more frequent and intense in Southern California. A 2020 study published in the journal Environmental Research Letters found that the use of such coatings in two Los Angeles neighborhoods decreased pavement temperatures up to 10°. That’s important, as heat absorbed by roads and other surfaces during the day is released at night, keeping temperatures elevated.

“Pacoima is one of the hottest parts of L.A. County and hasn’t gotten the kind of investment like a lot of other communities,” says Jeff Terry, vice president for corporate social responsibility and sustainability at GAF, which is funding the project. “One of the challenges with urban heating is that it doesn’t stop at night. Hopefully we’re going to make this place a little bit more livable for the residents.”

Over the next two years, a monitoring program will gather data to quantify temperature changes in the neighborhood that can be used to design cool pavement projects in other communities.

Terry says a second phase of GAF’s “cool community” experiment may include the installation of solar-reflective roof shingles in the neighborhood to reduce temperatures in residents’ homes. GAF says the final cost of the Pacoima project has not yet been determined.

Heat maps released this month by the University of California at Los Angeles show that during days of extreme temperatures between 2009 and 2018, Pacoima residents made 19,009 excess emergency room visits. That’s more than seven times the number in Santa Monica, a similar-sized community in Los Angeles County.

Pacoima is located in the northeast corner of the San Fernando Valley, ringed by mountains and far from Santa Monica’s cooling ocean breezes. The birthplace of 1950s rocker Ritchie Valens (“La Bamba”), it is encircled by freeways and home to a municipal airport and industrial facilities, all of which experts say intensify heating.

“I moved here about three years ago and just within those three years, I’ve noticed that it gets hotter sooner, and it lasts longer,” says Gabriel Carrillo, a community organizer with Pacoima Beautiful, an environmental justice organization that is working with GAF on the cool pavement program.

A worker checks the surface temperature of a street without reflective pavement coating, bottom left, and a portion thats been coated, bottom right. Photographer: Eric Thayer/Bloomberg

David Eisenman, a professor of medicine and public health and director at the UCLA Center for Public Health and Disasters, says that equity more than environment explains such disparities in heat-related health effects. “It wouldn’t be as much of an issue if Pacoima were a leafier, shaded and wealthier community,” he says. “Those communities can protect themselves as streets are shaded, so they don’t accumulate as much heat or give off as much heat at night, and homes are more often air-conditioned.”

“You’ll find a three-or-fourfold difference between neighborhoods like Pacoima and wealthier, greener neighbors in the same climate zone,” he adds.

“Whatever you can do to lower the temperature in the neighborhood has the potential to really benefit people’s health,” says Eisenman, noting that cool pavement projects need be undertaken alongside other efforts to reduce urban heat, such as planting street trees.

Los Angeles has applied solar-reflective coatings to neighborhood streets before, but the Pacoima initiative is the first to extend the use of such materials to “hardscape” at a school and park, according to Greg Spotts, executive officer and chief sustainability officer for StreetsLA, a division of the city of Los Angeles Department of Public Works.

“Often in underserved communities, there’s more hardscape and less trees both in the public realm and on private property,” Spotts says. “There’s a really interesting opportunity here to evaluate if we can have a greater neighborhood-cooling effect if we’re putting solar reflective coating on streets and in large off-street hardscape areas.”

When the coating project is completed later this summer, residents will be able to step out of their homes and walk or bicycle with their children along cool streets to the neighborhood elementary school, where a large cool playground will feature a mural by a local artist painted in solar reflective colors. After school, children can cross the street to the park and play on a cool basketball court coated in Los Angeles Dodgers blue. Parking lots at the school and park will also be treated with GAF’s StreetBond solar reflective coating.

“Parents in Pacoima walk a lot and they’re often walking their kids to the elementary school, so having pavement like this is exciting for our families,” says Melanie Torres, a community organizer with Pacoima Beautiful. “Most of the time in Pacoima we feel misheard or just kind of forgotten.”

The next phase of the project will be shaped by data gathered through a monitoring program run by Haider Taha, an atmospheric scientist who specializes in urban heat effects. Several times a month his firm, Altostratus Inc., will deploy a mobile cart equipped with sensors to measure temperature, radiation, air pressure and moisture in the neighborhood, as well as in adjacent uncoated streets. Two weather stations will also be installed to collect continual atmospheric data.

“We want to understand how a person at street level is affected,” says Taha, noting that sensors will measure pavement temperature and air temperatures at various heights above the street.

At the park, a GAF staffer aims a temperature reader at a stretch of newly coated pavement outside Jeniffer Ramirez’ house. It’s 10.2 degrees cooler than the untreated asphalt just a few yards away.

“I think this project is good for all the residents that live here,” says Ramirez. “Hopefully it works.”