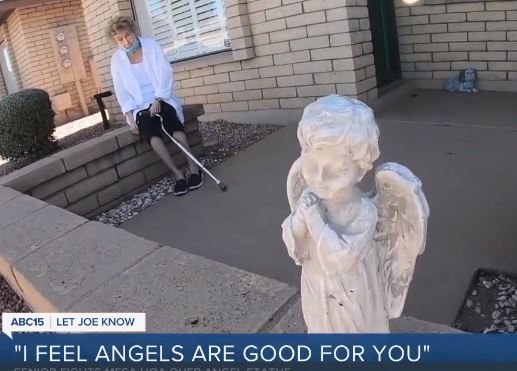 Written By Joe Ducey   | MESA, AZ — There are nearly 10,000 HOAs in Arizona regulating more than two million homeowners. Their purpose is to provide services and hopefully, keep property values high. But one Mesa senior says her HOA and the property manager they hired, have gone too far.

“I feel angels are good for you. They protect you,” Shirley says.  She’s talking about the angel statue that she placed on the short wall around her front sitting area.

“I believe in angels. I’ve been a Catholic all my life. I don’t come out and pray to it. It’s just a concrete statue,” she says.

It stands just 12 inches tall. Still, the small statue is causing a big worry for Shirley after getting a violation letter and a call warning her to remove it. Shirley lives in Sunland Village East Gardens in Mesa. It’s not the first time she’s had a run-in with that HOA and their property manager, Heywood Community Management. During the spring, she says she hung a flowered wreath that she had to remove. Around Easter, Shirley says she put up a plaque with flowers and birds. It too was an issue.

“They don’t want you to do anything that makes you happy or puts a smile on your face,” she says. Heywood Community Management not only sent her the angel “not allowed” letter, and an “excessive items” concern, they hit her with $100 in fines so far. Shirley says the pressure finally got to her.

“I don’t want to keep paying any more money,” she says. Though she hasn’t paid the fines yet, Shirley says she worries they could put a lien on her house.

So, she broke down and finally moved the statue out of public view. It now sits inside her porch wall facing her window.

After getting no replies to our emails and calls, we went to Heywood Community Management in Gilbert trying to get some answers. I was told this message would go to owner Larry Heywood who was handling the situation. But again, I did not get a reply to the email or phone number I left them. So, we couldn’t find out why an angel is such a problem.

If it’s a religious issue, our drive around Shirley’s Sunland Village East Garden neighborhood found similar symbols in other yards not far away.

If it’s an excessive display concern, we saw numerous porch areas with more and larger items than what Shirley has on her porch. She says she’s baffled by the issue.

But, while she did remove the statue from the wall, the fines are still not paid. When I asked if she would pay the fines, Shirley said a strong “no!”

“If they want me [to] donate $100, I’ll give it to St.Marys Food Bank or St. Vincent de Paul, but I’m not going to give them $100,” she says. We’ll keep trying to get answers and let you know if those fines continue.

What do you think? Should Shirley have to remove the angel statue? Let me know your thoughts: joe@abc15.com . And a special thanks to our Let Joe Know/Better Business Bureau volunteer Grant who tried helping Shirley and gave her much-needed support for months.

Rent or buy? Wannabe homeowners need to ask these 4 questions

House Hacking: How Millennials Use It to Start Up Their Own Remarkable Businesses

Home-sellers should expect a tide shift as interest rates rise

Sales of new homes drop to lowest in 4 months

HOA Homefront: Is this manager qualified?

How to Get Through a Structural Home Inspection and What to...

Are You A Non-Profit Or For-Profit Developer Seeking Financing?