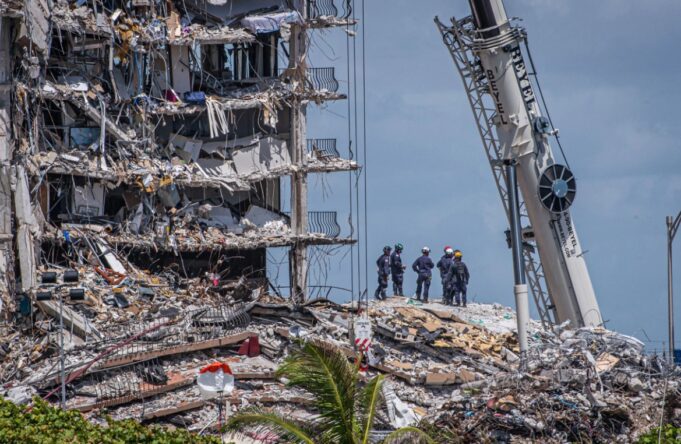 People who owned units in a Florida oceanfront condominium building that collapsed last year will divide $83 million for property losses, with the compensation for families over the 98 deaths still to be determined, a judge ruled Wednesday.
The money for owners of the 136-unit Champlain Towers South building will come from sale of the now-vacant beachfront land as well as insurance policies, officials said. Unless they opt out, the owners who take the deal will relinquish their rights to sue individually but also could avoid an assessment because of the loss.
“It gives them certainty. These people need certainty and they need to carry on,” Miami-Dade Circuit Judge Michael Hanzman said before approving the deal at a hearing. “Maybe it’s not 100% of value, but it’s pretty close. I think it’s an outstanding result.”
Champlain Towers South, a 12-story condo in Surfside, Florida collapsed without warning early on June 24. The settlement is part of a lawsuit arguing work on an adjacent luxury condo building, known as Eighty Seven Park, damaged and destabilized an aging building already in dire need of major structural repair. The defendants associated with Eighty Seven Park deny any negligence or wrongdoing.
The cause of the collapse remains unknown, although the building was in the midst of a 40-year inspection and engineers had pointed out some serious structural flaws previously. The National Institute of Standards and Technology is the main investigative agency in a probe that could take many months.
Under the agreement Wednesday, each unit owner will be paid a share based on their ownership portion of a condominium unit and for personal items that were lost. It does not does not include money for wrongful death claims arising from the 98 fatalities, which will be settled later after input from court-appointed experts.
“We have 98 people who lost their lives and we need to keep this case in perspective,” Hanzman said.
Some family members of those died questioned why the property owners get the first chunk of guaranteed money.
“Loss of life is extremely more valuable than losing property,” said Martin Langesfeld, whose sister and brother-in-law were killed. “We believe it is completely unfair.”
Yet Alfredo Lopez, who survived the collapse with his family, said the settlement does not begin to compensate owners for the true value of their former units.
“We are surviving victims. We will be getting a fraction of what our homes were worth,” Lopez said.
The Surfside site where the building once stood will be put up for auction in the coming weeks, attorneys said. One offer for about $120 million has been on the table for months, but there may be others as the auction approaches.
Hanzman said the deal approved Wednesday is contingent on the land sale going through. It is possible the sale could be for a higher amount.
The city of Surfside, meanwhile, is creating committees led by Champlain Towers South families to organize an anniversary event this June and to consider how to construct a permanent memorial to the victims who died.
Source: Local10  News
See also  How to write to your condo/HOA manager or board