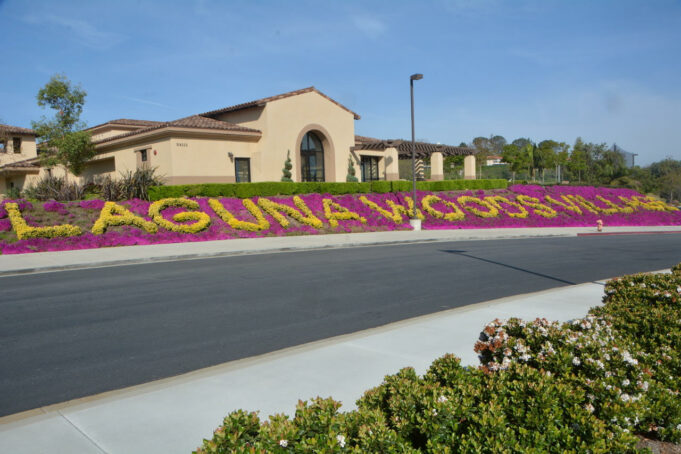 The study of the trees, conducted by staff and certified arborists, said the density of the pines creates a challenge to maintain healthy turf and shrub beds below because of the obstruction of sunlight and the competition for groundwater, according to the Village Breeze. In addition, the study said large accumulations of pine needles fall onto roofs and carports, blocking gutters, drains and downspouts.  Concerned residents at a regular meeting of the United board on Tuesday, March 8, argued instead that the removal of so many trees would be “excessive”  and “environmentally wrong” during these “ecologically stressed times.”  Nearly two hours of discussion was dedicated to the overwhelming support that turned out in favor of maintaining the fire-resistant, drought-tolerant conifers.

“We’re going to have to change our name if there are no more woods in Laguna Woods,” one resident said.  Wiemann invited attendees to the United Landscape Committee meeting, gathering at 9:30 a.m. on Thursday, March 10, in the board room, when a final decision is expected to be made. The meeting will also be accessible online via Zoom.  GRF meeting  Another entity will join a mighty fleet set to solve rising insurance costs in Laguna Woods Village.  The Golden Rain Foundation is establishing an insurance ad hoc committee with the sole purpose of researching and evaluating risk management alternatives.  Soaring insurance rates across California in recent years have been fueled in part by an unprecedented number of wildfires, leaving homeowners to face doubling or tripling premiums.  More than 8,600 wildfires burned 2.5 million acres in 2021, claiming 3,600 buildings and three fatalities, according to a CAL FIRE incident report.

In Laguna Woods, Third Mutual residents have been hit the hardest with a rise in insurance costs leading to an increase in HOA fees. As of January, members have been paying an extra $93 in assessments per manor per month – the maximum fixed amount an HOA fee would be legally allowed to increase at one time.  As originally reported in May, a valuation of the Village increased property insurance coverage from the historic annual $700 million to $3.4 billion. Of that sum, Third is responsible to cover $1.6 billion.

Since then, several strategies have been considered among the housing boards, such as partial liability coverage, or reducing the percentage of property damage a mutual would be responsible to cover. Current CC&Rs hold Third accountable for full coverage.  GRF’s ad hoc insurance committee intends to conduct itself within the parameters of current insurance pricing and respective requirements of each housing mutual and the GRF, while also making recommendations on behalf of the entire community, a Village Management Services staff report said.  For more information on how to get involved, members can contact their mutual president regarding upcoming meetings and advising roles, GRF President Bunny Carpenter said.  The board unanimously approved the resolution creating the committee on March 1. The resolution takes immediate effect.  Carpenter said the boards will be working together, with input from residents, in the formation of the committee.

COVID-19 update  Countywide, COVID-19 counts are continuing their fall.  Public officials reported a daily case rate of 7.5 new cases per 100,000 residents across Orange County as of Tuesday, March 8. About a month ago, the OC Health Care Agency was tracking more than 100 new daily cases per 100,000 residents.  In the city of Laguna Woods, a total of 1,044 COVID-19 cases and at least 73 deaths had been reported as of Tuesday.  Countywide, the testing positivity rate – the number of swabs and spit tests that return positive for the coronavirus – has fallen to 3.3%, and slightly higher is the health equity – the test positivity of disproportionately impacted neighborhoods – at 3.9%.

Written By Brooke Becher for  The OC Register