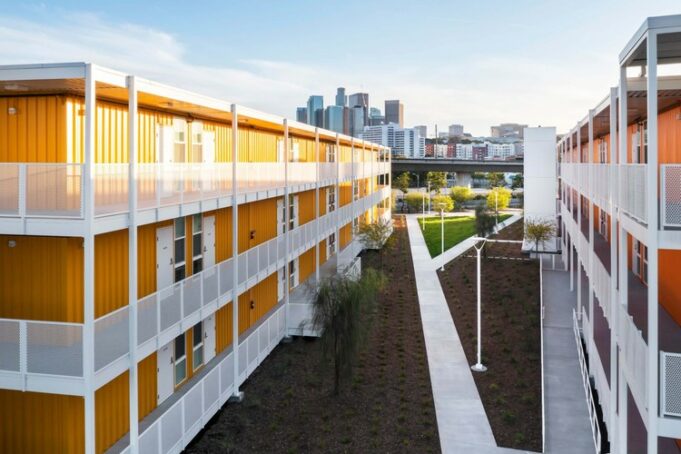 From the outside, the Hope on Alvarado apartments look pretty much like any new development. The building northwest of downtown is five stories high, its floor-to-ceiling windows and steel exterior giving it a modern-industrial feel.

But inside, things look different than your average brand-new apartment complex. The units are steel containers (much like the shipping containers you see loaded at the docks of the Port of Los Angeles) that have been converted into micro-apartments. The common spaces are filled with amenities and resources to support the building’s formerly homeless residents.

The 87 units are all small, admitted Mark Oberholzer, an architect who worked on the project. The floor plans are all either 320-square-foot studios or 480-square-foot one bedroom apartments.

Despite their size, they are far from dingy. They have nice flooring, space-efficient barn doors for the bathrooms, and come fully furnished.

“But I think that for me, the nicest aspect of the units is the amount of glass,” said Oberholzer. “To me, and I don’t know if everyone would agree, the aesthetic of the building is like more like a high-end condo building. And for people that at first spend a lot of time in their units, having a lot of natural light is important.”

“We’re trying to meet people where they come from,” said Oberholzer. “They’re kind of just adjusting. I mean, imagine what it’s like to not have anywhere of your own space, then to move into an apartment, and just all of the things – you know, the key cards, the access, all your own appliances, cleaning – all those things you have to adjust to.”

Staff on site are also there the help residents with challenges they may face as they transition out of homelessness, whether it’s getting a doctor’s appointment or getting a driver’s license.

The real advantage of this sort of steel modular housing, Oberholzer explained, is how fast buildings can be built and assembled. The steel containers are converted into apartments off-site, which means that work can begin at the same time a foundation is being laid and a framework is being built. Once the bones of the building are in place, the containers just need to be dropped into their spots and locked together.

“In L.A. specifically, but also in California, it’s like you can hardly get housing built fast enough for the need. The more time goes by, the more housing gets expensive, the more people being homeless,” said Oberholzer. “And that’s really one of the big things that modular [construction] helps with.”

This project was a test case of sorts, said Oberholzer. Three projects like the Hope on Alvarado building are slated to open around Los Angeles this year.