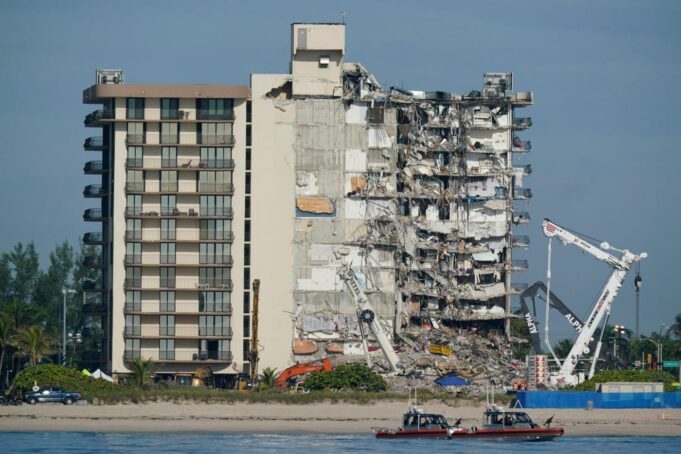 MIAMI BEACH — An evacuation order has abruptly forced out residents of a 14-story oceanfront building on the same avenue where a condominium collapse killed nearly 100 people last year. The city posted an unsafe structure notice at the Port Royale condominium, Miami Beach spokesperson Melissa Berthier said in an email.

A structural engineering report prompted the evacuation of the 164-unit structure, which is in the process of undergoing a required recertification. An engineer discovered that a main support beam identified for repair 10 months ago had shifted and that a crack in the beam had expanded, and other structural supports may need repair as well, the report said.

At least one observer said the damage extends beyond a single support beam.

Inspection Engineers Inc. said in a letter to the city that it’s working to obtain a city permit so that “comprehensive shoring” can be installed within 10 days. That will be followed by another inspection of the building, which was constructed in 1971.

During an inspection about 10 months ago, engineers found “areas of concern that we designated as a priority to be repaired,” Arshad Vioar said in an email sent to the Miami Beach Building Department.

The building’s association selected a contractor and the repairs started about four weeks ago. The firm that inspected the building was asked to supervise the work and this week “noticed that one of the main beams in the garage had experienced a structural deflection of approximately ½ inch and also the existing crack that was marked for repair had extended,” Vioar said in the email.

The Port Royale is about 1.3 miles south of the Champlain Towers South condo building in Surfside, Florida, also on Collins Avenue, where 98 people were killed in a June 2021 collapse.

The disaster at the 12-story oceanfront condo building in Surfside drew the largest non-hurricane emergency response in Florida history, including rescue crews from across the U.S. and as far away as Israel to help local teams search for victims.

Other buildings in South Florida have been evacuated in similar safety scares since the Surfside collapse.

The Champlain Towers South collapse focused scrutiny on the structural integrity of aging condominium towers throughout Florida, especially along its coastlines, and the state has since moved to strengthen laws requiring inspections and periodic recertification of buildings.

New state rules signed into law in May require buildings to have their first recertification after 30 years, or 25 if they are within 3 miles of the coast, and then every 10 years thereafter.

Miami-Dade also now requires building owners to provide up to three months of housing and associated costs if officials determine their building was unsafe as a result of negligent maintenance.