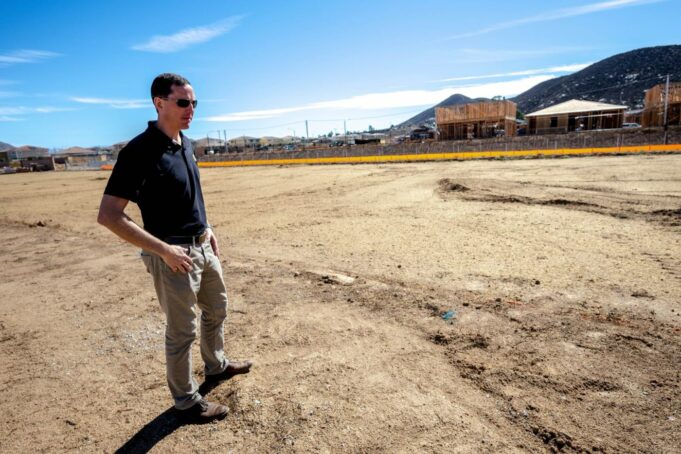 Saws and hammers ringing out in the town of Menifee are crafting a new model community for America’s clean energy future.

These houses will be interconnected like a hive, sharing data and electricity in a network of backup batteries. A 2.3-megawatt “community battery” the size of a shipping container will supplement each home’s power supply, delivering even more electricity to residents.

When finished, the Menifee development will be a “microgrid” — perhaps the first such residential project of its kind in California.

The development also is one of 10 U.S. Department of Energy-funded pilot projects aimed at curbing global warming and developing more energy-efficient buildings.

DOE is holding a ribbon-cutting ceremony today, Nov. 2, at Ohio State University in Columbus to publicize the 10 projects in its “Connected Communities” program.

The federal government is providing about $60 million of the $99.5 million being spent to develop microgrids and install energy-saving technologies in homes, apartments, offices and commercial buildings across the country.

Keeping the lights on

We all know what “the grid” is. It’s the network of transformers and transmission lines that distributes electricity from power plants to light switches in our homes.

So, what’s a microgrid?

Simply, it’s a building, an industrial facility, a campus or a cluster of homes that can generate its own electricity when the larger grid shuts down.

San Diego’s Marine Corps Air Station Miramar has a microgrid. UC Irvine has been quietly turning its entire campus into a microgrid for the past decade, using gas- and steam-powered turbines to provide 19 megawatts of power.

“What sets a microgrid aside is (power) generation,” said Scott Samuelsen, a UC Irvine engineering professor and Menifee project researcher. “It can operate on its own in case of a grid outage.”

Microgrids are not new. But mostly they’ve been used at commercial buildings and industrial sites, typically with just one owner.

“We do commercial microgrids all the time. All sorts in the commercial industrial space, utility space,” Wills said. “What’s unique about this is taking that knowledge and ability and applying it to a residential application. … Doing a microgrid for 237 different homes with 237 different owners is actually more complicated.”

Scott Hansen, vice president of forward planning for KB Home, shows a SunVault battery storage unit by SunPower inside the garage of a model home during a tour of KB Home microgrid communities in Menifee on Wednesday, Oct. 26, 2022. The Oak Shade and Durango communities will feature all-electric homes equipped with solar panels and batteries. (Photo by Watchara Phomicinda, The Press-Enterprise/SCNG)

The energy department awarded $6.5 million to the Menifee project, with a group of public and private partners providing $3.5 million worth of supplies and labor.

Some of the federal dollars will pay for equipment, Narayanamurthy said. But most of it will pay for designing the community, developing software and research to analyze the project’s effectiveness.

See also  HOA Homefront: Can the board ban solar panels?

The partners describe the project’s key feature as “resiliency.” By that, they mean the ability to keep the lights on when the grid shuts down.

“Having power when (the grid shuts down) is increasingly important to people,” Wills said.

To the east, a bustle of trucks, forklifts and construction workers clog the street where 37 wood-frame skeletons rise, forming a future neighborhood.

KB calls the all-electric development a “smart-energy connected community” on its website. A spokesperson said sales have been good so far. About 40 houses have been sold, with the first deliveries expected in February.

But the timing of the project isn’t great.

With interest rates doubling this year and likely to climb higher, sales of newly built Southern California homes have fallen in 11 of the past 12 months, CoreLogic figures show.

But project managers don’t expect the housing slowdown to have much impact on the microgrid.

“We’re going to be watching the project, and we’re going to make sure it’s going at a good pace,” the energy department’s Narayanamurthy said.

There’s no additional charge for the solar array and batteries, and the developers say homeowners will see lower utility bills. Under a power-purchase agreement, SunPower contracts with homeowners to provide electricity at a reduced rate for 25 years.

All are “net-zero” homes, meaning they will be able to produce as much energy as they consume over a year.

It’s been a decade since KB unveiled its first ZeroHouse in Lake Forest . But the solar arrays for the Menifee homes are much smaller as builders make homes more energy-efficient.

“The strategy is to reduce before you produce,” said Jacob Atalla, KB’s vice president of innovation and sustainability. “You got to get the homes to be more energy efficient, so their demand on electric load is lower.”

The larger, roughly 5-by-2-feet big, contains two SunVault batteries that store electricity generated by the home’s roof-top solar panels. The other, called the “hub,” controls the battery as it switches from utility power to backup electricity.

Scott Hansen, vice president of forward planning for KB Home, points to a battery display panel on a SunPower SunVault storage system inside the garage of a model home during a tour of KB Home microgrid communities in Menifee on Wednesday, Oct. 26, 2022. The Oak Shade and Durango communities will feature all-electric homes equipped with solar panels and batteries. (Photo by Watchara Phomicinda, The Press-Enterprise/SCNG)

“This is the brains of (the system),” Hansen said.

The SunPower batteries — a direct competitor with the Tesla Powerwall — have 13-kilowatt hours of capacity — enough power for at least half of a typical home’s daily use.

Mounted on the garage’s outside wall is Schneider Electric’s circuit-breaker panel, called the Square D panel. It allows designers to combine several panels in one box and to separate the essential circuit breakers (like the ones going to the refrigerator) from less essential ones (like the air conditioner and electric vehicle charger).

There’s an EV charging outlet in every garage. The Menifee project is developing “bi-directional” car chargers so homeowners can use their electric vehicles to power their homes as one more source of electricity during an outage.

“If there’s a massive fire just up the street, this community will not lose power,” Hansen said. “It’s a standalone community.”

Less visible is the software that manages all these myriad components.

“It starts watching and learning, and it tells you where you’re using energy,” said Wills, Schneider’s director of strategic customer programs. That gives the homeowner a granular understanding of where they’re using electricity and how they can cut back. Apps allow the owner to automate those changes.

“What was a dumb gray box in the garage is now a smart connected panel that is monitoring the energy in the home,” Wills said.

The microgrid is watching

The microgrid also is looking for ways to conserve energy when it’s disconnected from the grid to ensure it has enough capacity to keep essential devices like refrigerators, lighting and outlets operating.

Under a practice called “demand response,” the community pays homeowners who opt in for control of non-essential devices during a grid outage. A “load-leveling algorithm” allows the grid to limit the amount of electricity used by any one home.

“So, in the event of an outage, … we will have the ability to control those loads,” Wills said. “The point is (to make sure) they don’t drain the battery because the entire community decides to run their air conditioners and charge their cars in an outage.”

KB says its goal is to standardize the process, making microgrids easier to build as California phases out natural gas appliances and gasoline-powered cars.

“We just believe that this is the next frontier,” said Dan Bridleman, KB’s senior vice president of sustainability and technology.

“The idea,” added Schneider’s Wills, “is to learn from it and get to a point where instead of designing each of these as an individual snowflake, there’s more of a cookie-cutter approach.”