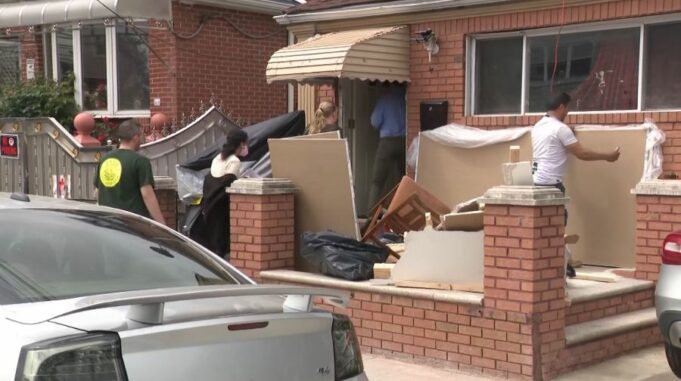 Hurricane Ida devastated parts of New York City back in September, and some Queens families are still dealing with the damage left behind. Nine months later, some residents haven’t received money from FEMA to help rebuild, while others haven’t even been able to move back into their homes.

City agencies on Friday toured parts of Queens hit badly by Ida. With hurricane season right around the corner, families are tired of the tours and desperate for help.

“My senior parents, they need to come back home. It’s been nine months already. What more do we need to do?” said Amit Shivprasad.

“My home we haven’t been able to repair because FEMA didn’t give us enough money,” said Athena Arzuaga.

The tour on Friday was organized by Councilwoman Nantasha Williams, with representatives from multiple agencies including the comptroller, borough president and Congressman Gregory Meeks’ office.

“Let’s get everybody here and let’s figure out how we can expedite the process,” Williams said.

More than $400 million in federal funding has been allocated to New York City for families affected by Ida, but local leaders say trying to coordinate all agencies on all levels of government has been a challenge.

“It’s frustrating as a legislator to not be able to speed up the process,” said Assemblywoman Alicia Hyndman.

Shivprasad, who has been the face of this community since Ida, said with hurricane season just days away, he is worried.

“We know this neighborhood cannot handle one more storm,” Shivprasad said. “This is a disaster. We really need the help from our mayor.”