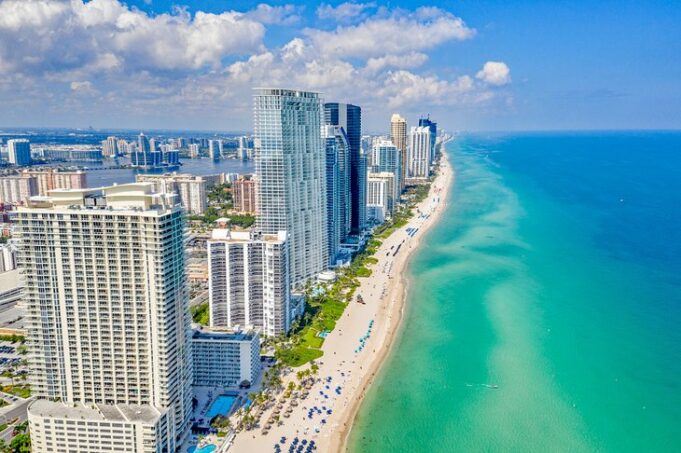 UrbanX principal Coralee Penabad developed the River Landing mixed-use project on the bank of the Miami River, in an area called the Health District, which bustles with workers from nearby hospitals and a courthouse. A key focus, she said, was providing access to the waterway, which had long been considered an industrial, working river rather than a community asset.
Designed with an open-air passageway that invites people to walk through the retail complex from the street to the river, and with a setback from the water where people can linger, the project attracts people naturally, “without ever having to feel like they need to buy something in order to be there,” Penabad said.
That welcoming feel paid off: River Landing’s 528 multifamily units were absorbed in nine months.
Penabad and other commercial real estate experts spoke at Bisnow ’s Future of Wynwood and Allapattah event Thursday, held inside the newly completed 195K SF Gateway at Wynwood.
Wynwood is a once-gritty neighborhood packed with warehouses that has transformed into a hub for street art that later attracted trendy, independent businesses. Now, the area is booming with construction cranes as tall high-rises stack the streets.
The neighborhood is in the “fifth inning,” Tricera Capital co-founder Scott Sherman said. Normally, he said, neighborhoods grow with residential offerings first, then office and retail follow. Wynwood had retail first, and its bustling vibe made businesses want to be there.
With work-from-home becoming a more viable option every day, panelists discussed how it takes something special for workers and business owners to want to be in offices — and Wynwood offers that with its authenticity and energy.
“We bought The Cube in March of ’21. We’re already fully leased,” Sherman said. “We just signed Blockchain.com for two floors.”
Numerous other notable companies, from hedge funds to Spotify and SoftBank, have also taken space in Wynwood, where Class-A office rents average $66.67 per SF, according to a Q4 2021 office market report from Blanca CRE.
With land prices rising, development has spread outward from the neighborhood core. Wynwood Equity Partners President Yoni Bornstein is developing an area called Wynwood Norte in the blocks north of the trendy arts district.
It was inevitable that, given the growth of Wynwood, development would creep northward, he said, so he decided to be proactive and involve longtime residents in planning as the neighborhood faced gentrification. Together, the stakeholders developed a community vision plan, then sought zoning changes that would allow the center of the neighborhood to remain low-rise while allowing density on the fringes.
As a result, he said, character is maintained from the single-family homes and small apartments, while developers are still allowed to build denser product, which allows them to make returns and also provide affordable units. The long-term residents appreciated infrastructure upgrades and streetscape improvements that came with the new development, he said.
“The reason it went fairly smoothly [is] it was never about our project, it was always about the community,” Bornstein said.
West of Wynwoood, Allapattah is a working-class neighborhood where prominent Miami developers have been buying up parcels and announcing big projects over the past few years.
Allapattah Collaborative Director of Economic Development and Strategy Francesca Escoto said that, like Bornstein, she’s working to influence zoning ordinances to prevent displacement of longtime residents. Equitable development is a growing philosophy for urban planning that lets traditionally underserved populations be more involved in how their communities evolve.
“Sometimes when developers come in, they imagine a blank canvas, that they’re creating something new,” Escoto said. “And what we’re saying is, ‘It’s not a blank canvas. There’s a beautiful painting already.’ So can we work with the painting that exists? Can we enhance the colors?”
A key focus now, Escoto said, is how best to develop Little Santo Domingo, a section of the commercial corridor lined with Dominican-owned businesses.
A combination of stakeholders, styles and ideas ultimately leads to a more vibrant feel than a master-planned project, panelists said.
“I don’t think a neighborhood needs one singular identity to survive and to thrive,” Carpe Real Estate Partners principal David Weitz said. “It’s got multiple identities. That ecosystem is going to be what sustains the growth of Allapattah.”
Source: Bisnow
See also  Working from home? Here’s what you can (and can't) deduct on your tax returns