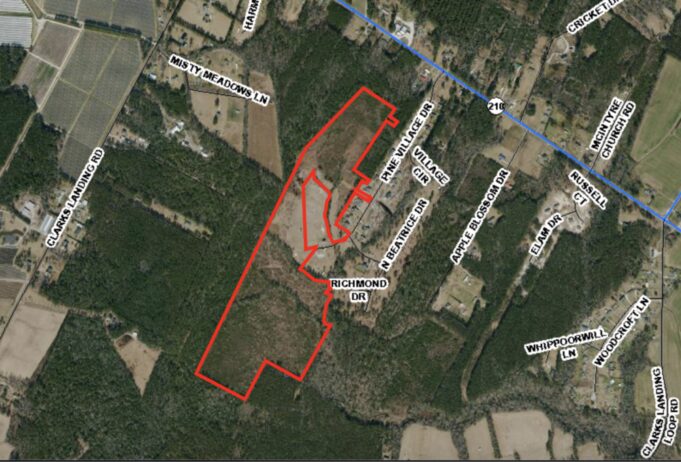 Pictured: The boundaries of the Pender County tract at the center of a failed rezoning request. (Port City Daily/Courtesy Pender County)

PENDER COUNTY — Residents in a Rocky Point community have moved to stunt the campaign of the man who originally developed the neighborhood, and who failed this week in a bid to rezone more land and expand the single-family project. Elloyd McIntire spent more than 50 years cultivating 100-plus acres of property between Castle Hayne and Burgaw. He purchased it from the Wilson family in 1957 and first developed it as a mobile home park in the late 1980s.

Single-family homes built on half-acre lots followed in the 1990s, and a driving range was constructed at the end of the access road, which runs perpendicular to Highway 210. Lot sales for the development’s next phase began around the time of the Great Recession, with little success. Around 54 lots are either built-out or under construction at the moment.

Last year, McIntire, 85, offloaded two dozen lots and more still-undeveloped land to Tioga LLC, leaving him with 70 acres. His recent attempt to rezone the remaining property — so he could potentially build around three units per acre rather than two — faced opposition from the homeowners association of his own projects, and ultimately from the county commissioners themselves.

At the board of commissioners hearing Monday, amid talk of inadequate access to the site and other red flags, McIntire told the board that homeowners had the right to express opinions: “But what they do not have the right to do is infringe on my rights as the developer to complete the project.”

As he spoke, he waved a copy of his 1996 approval from Pender County to build an 83-acre, three-phased development, which he intended to see through.

“There’s something else going on here,” he said. “It is my belief that the homeowners speaking here tonight are trying to use this board in Pender County to get around the covenants that govern our Grand Oaks community.”

Nancy Kurul, former secretary of the Grand Oaks Homeowners Association, corresponded at length with local officials in the planning department prior to McIntire’s hearing before the planning board, which unanimously recommended denial of the rezoning last month. She also spoke at the board of commissioners meeting Monday evening, where McIntire’s application was denied unanimously.

There is only one entrance-exit to the development off Highway 210, creating congested traffic as lots continue to be built, Kurul told the board. Further, the stormwater system could likely not handle additional, denser development.

Chief among her complaints: McIntire previously deeded the private road in the development to the homeowners association, which now maintains it (a common move in the developer-HOA relationship, with road upkeep often becoming the most costly association line item to maintain). This was inked despite the fact that traffic to his driving range flows in and out the development’s single entrance. Kurul has rebuffed McIntire’s claims that the homeowners association will be assessed for future repairs and a turn-lane installation.

McIntire said these complaints were simply attempts to “discredit me” and “undermine my project.” He read at length from the neighborhood covenants that he said justified his quest to continue developing. Commissioner Jackie Newton took issue with McIntire’s apparent threats of legal action directed toward his homeowners.

Chairman George Brown represents the Rocky Point area of Pender County where the development is located. He told his fellow commissioners, as chairman, he could not put forward a motion, but that he strongly favored denying McIntire’s request.