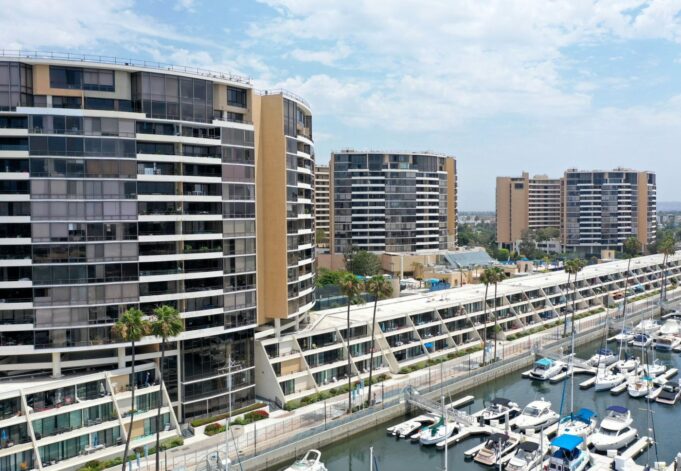 The report by Pasadena-based Saiful Bouquet Structural Engineers found cracks in walls and cement, signs of water intrusion in parking garages, “spalling” and crumbling concrete and water-damaged rooftop decks. Cement fastenings to handrails along walkways and on private balconies also were deteriorated, creating a safety hazard, the report said.  It referred the problems to building operator Essex Property Trust, recommending that the publicly traded apartment trust make necessary repairs to the three 18-story condo towers, parking structures and apartments. Officials from the San Mateo-based firm couldn’t be reached for comment.  However, the report by Saiful Bouquet Structural Engineers of Pasadena found no danger of imminent collapse.

“No significant structural damage was observed,” the 14-page engineering report, released publicly Tuesday, Feb. 22, concluded. “It is our opinion that the majority of damages observed were a result of normal wear and tear of the structure and/or moisture/water intrusion in the building envelope.”  The report recommended that further engineering studies be done to determine how the condo owners and the adjacent apartment building should address the needed repairs and how they could prevent future deterioration and corrosion.

“Ultimately, it’s maintenance issues that kind of got neglected over time,” said Steven Frasher, a spokesman for the L.A. County Public Works Department.  A county statement said Essex is engaging Saiful Bouquet and other consultants to prepare repair documents and perform further assessment.  The County Board of Supervisors voted in July to order the engineering report following numerous studies showing the complex needed $80 million to $140 million in repairs , although its maintenance reserves were severely underfunded.

Residents of the three, circular towers complained about leaking pipes that flooded their condos, water pooling on roofs and in parking garages, and leaking in stair wells.  The damage to the waterfront Marina condos appeared eerily similar to reports of crumbling concrete and parking garage flooding that preceded the June 24 tragedy in Surfside, Fla.Champlain Towers residents had years of studies showing their oceanfront building needed major repairs. But even though the $15 million estimate for fixing Champlain’s problems paled in comparison to the cost of repairing the Marina City Club, residents tragically resisted special assessments to raise the needed cash.

An official investigation appears to be months, if not years, away from finding a cause of the collapse. But subsequent news reports show Champlain Towers probably had issues far exceeding those of the Marina City Club and most other buildings in the nation. Engineers hired by the Wall Street Journal and the Miami Herald concluded design flaws, combined with years of neglect, caused a steady erosion of the Champlain Towers infrastructure. Some columns at the base of the building were undersized and lacked reinforcement bar, while parts of the building lacked adequate shear walls to provide stability, the newspapers reported.

Nonetheless, at least one Marina City Club resident familiar with the Saiful Bouquet report remains skeptical of its conclusions, saying it didn’t probe deeply enough to determine if the building is safe.  The report said its conclusions were based mainly on visual inspections, adding that it made external observations only because apartments and condos are occupied.  Sixth-floor Central Tower resident Elana Mondragon complained that one beam in a parking garage is buckling, that sections of the garage roof appear distorted and that water still is pooling in parts of the garage.

“It’s not a neutral report. It doesn’t even address structural integrity,” Mondragon said. “I can see with my uneducated eye how these things are buckling up.”