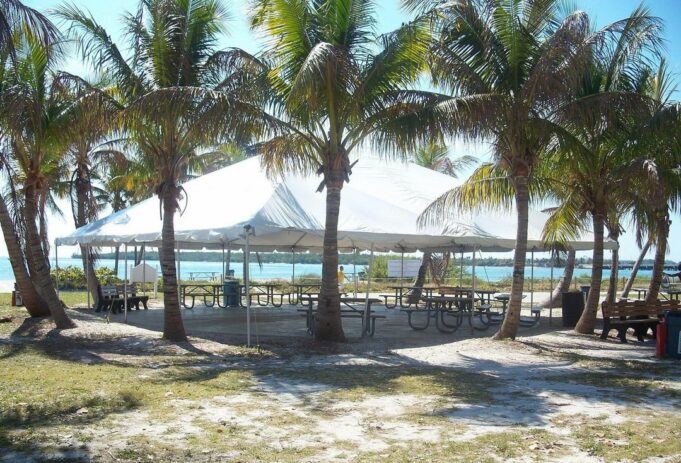 The Miami City Commission approved a pilot program to construct 50 to 100 small dwellings on Virginia Key, an island in Biscayne Bay that is largely recreational parkland, as temporary housing for people experiencing homelessness.

In an unexpected twist of events, the Miami City Commission on Thursday approved the program for a “transition and transformation zone” — a key vote that happened two hours after the five-member body initially rejected the measure, the Miami Herald reported.

Commissioner Alex Dìaz de la Portilla switched his vote, which cleared the way for a program to build the supportive housing on the barrier island a mile from the city as well as study five other possible sites, the Miami New Times reported. Three of those are under Interstate 95 in different neighborhoods of Miami-Dade County, according to a presentation the Miami Department of Human Services introduced during Thursday’s commission meeting.

Building the homes on the island was billed by the approving commissioners as the geographically “optimal” choice due to the separation that Biscayne Bay provides from the barrier island to the mainland. It could be as long as six months before the city could purchase the land, where it would also have to build utility connections, the Herald reported.

Like other major cities, Miami has been exploring new solutions to the nationwide homelessness crisis, which is rising especially in areas where housing costs are shooting up. The city’s staff presentation included a preferred option of building tiny homes that cost as little as $4,500 to construct for the Virginia Key site.

Last fall, District 3 Commissioner Joe Carollo, who proposed the Virginia Key plan, zeroed in on the homeless population with multiple crackdowns, causing uproar from community leaders. In October, Carollo led the passage of a new city ordinance to clear tent encampments, resulting in a lawsuit against the city that is ongoing.

Carollo defended the plan, which some community members likened to Alcatraz for its appearance of displacing unwanted elements of society to an island, as a logical outcome considering locals typically push back on new homeless shelters in their neighborhoods.

“No one wants this in their neighborhood, it’s always somebody else’s they want to dump it in,” Carollo said, according to the Herald. “I think we could move on in looking at one particular site that does not affect any of the population areas. Then we could see, if it works in one site, if we want to expand it.”

But outdoor enthusiasts could see a vital piece of Miami’s recreational infrastructure diminished. The Virginia Key Outdoor Center posted a statement on Instagram after the meeting saying the staff was “devastated.”

“Nobody wants a homeless encampment in their backyard, so we’ll put it in everybody’s backyard, in a gem of a public park,” Esther Alonso, the owner of the VKOC, said at the meeting, according to the Herald. “It would not be a good co-existence situation. You can’t have a bunch of homeless men around teenage girls in bikinis.”