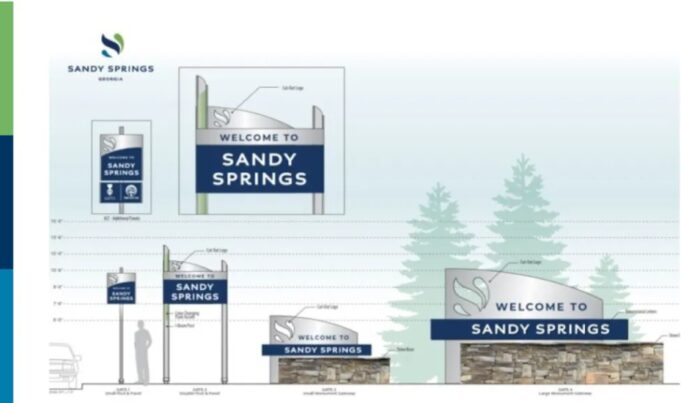 Sandy Springs City Manager Eden Freeman and Mayor Rusty Paul explained to the High Point Civic Association that if their property taxes are going up, it’s because of the county and the school system. Freeman spoke with the association at its annual meeting on March 23. She said her return to Sandy Springs after working for the city from 2009 to 2014 is a pleasure and a privilege.
A wayfinding sign is planned for the Windsor Parkway-Roswell Road intersection, but the city needs more land for the signage and a right turn lane.
“And coming back here, I want to build upon that legacy and also continue to enhance everything that we’re doing with improving transportation,” she said. Freeman told the association that when Sandy Springs was incorporated, the millage rate was set at 4.731.
“A referendum would be required to change that millage rate to go higher,” she said. Roughly 14% of a property owner’s tax bill stays with the city, with the remainder going to the county – approximately 54% to Fulton County Schools and 30% to Fulton County, with the state getting a share of it also.
“You see that the millage rate is set in stone,” Mayor Rusty Paul said. The council and mayor can’t change it, only the voters can.
“About eight to 10 years ago, we took a further step. We had then asked Wendell Willard, who was our city attorney and also a member of the legislature, to go in and cap the amount the taxes in Sandy Springs can go up based on assessments,” Paul said.
The increase is capped at either 3% of the consumer price index, whichever is lower, he said.
With inflation as high as 10% in metro Atlanta (as it had the highest inflation rate in the country for the past three months) Sandy Springs can still only let property taxes be raised based on valuation by 3%.
“And how do we do that? We basically have a floating homestead exemption so that when your assessment goes up, your homestead exemption goes up to offset all that either 3% or CPI increase that we’re allowed to do under state law,” Paul said.
But the overall property tax bill still can increase, he said.
“The county and the school board operate under different rules. So you may get an increase from them, but you’re not gonna get it from the city of Sandy Springs,” he said.
The city is working to make a “mid-course correction” to its Next Ten comprehensive plan, with a panel of city residents looking at the code to advise City Council on needed changes.
Housing challenges need a regional solution
The city does face a disturbing challenge in housing, Paul said. A homeowner is in great shape with housing values rising 17% in the last 12 months.
But, many people don’t know that 42% of the single-family homes bought in metro Atlanta, including Sandy Springs, were bought by hedge funds and private capital for rental purposes only, he said.
Paul said money managers are looking at single family houses as an investment.
“Our firefighters, the people who work at the hospitals, all those, they’re getting crowded out. Sandy Springs only built seven houses last year. The whole city. So we do have a housing issue that we’re trying to deal with,” he said.
The High Point Civic Association might be surprised to learn that more than 60% of the housing in the city is rental, Paul said, which is the reverse for the rest of North Fulton.
“The cost of red clay in Sandy Springs is more valuable than gold, and land is going for between a million and $3 million an acre. People are now tearing down $700,000 houses and building houses that are in the $3 million to $4 million range, he said.
Paul said he’s on the ARC Housing Task Force and knows this is not just a Sandy Springs problem and isn’t something the city can solve on its own. Councilman Tibby DeJulio said the land costs affect city plans for wayfinding signs and roadway safety improvements.
A traffic study on the intersection of Windsor Parkway and Roswell Road showed that Windsor has too much traffic to have right turns and traffic going straight in the same lane, he said. City traffic planners came to the realization that a right turn lane was needed.
“We have a little sliver of property right there. But we’re going to need more property,” DeJulio said.
But land is going for a premium in Sandy Springs as the mayor remarked, DeJulio said.
“That’d be a big improvement because the few cars that go straight through really hold it up for most of the cars which do turn right at that intersection,” he said.
Source: Reporter Newspapers & Atlanta Intown
See also  Looking for rental assistance? Fulton County can help.