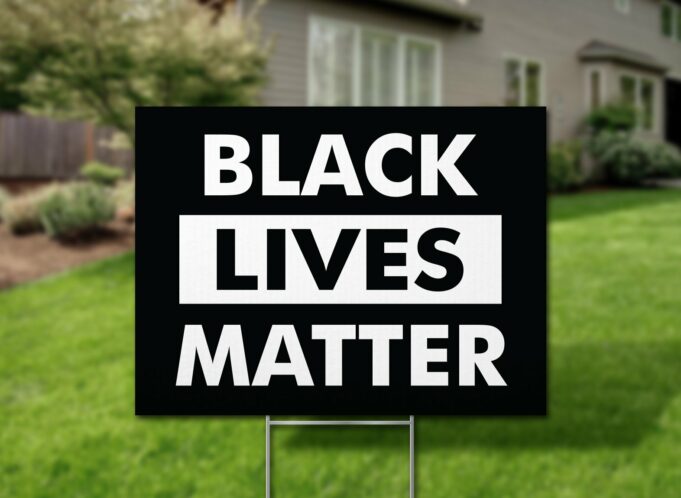 The vice president of the Camino Ramon Terrace HOA in California has a Black Lives Matter and an anti-Trump sign in her car. The HOA sent an email notifying her that the signs aren’t permitted in the HOA and must be removed. Her response? The HOA has no control over signs in cars parked in the HOA. Is she right?

Here, we discuss sign challenges in the time of a presidential election, in addition to providing an answer to this reader’s question, which touches on the same issue in California: How to get an owner to comply with an HOA’s sign policy.

Our experts have varied opinions on whether signs in cars are permissible in the face of a community’s no-signs policy, particularly because the key issue is what the governing documents say. “It’s really going to be dependent on the covenants,” reports Elizabeth White, counsel at the law firm of Sands Anderson PC in Williamsburg, Va., where she leads the firm’s national community association industry team.

“In Virginia, community associations have two bases for rules: One is the covenants, and the other is statutory,” she explains. “Associations can’t legislate rules regarding what happens on people’s lots unless there’s clear authority in the declaration and covenants.

“I’ve seen people try to skirt sign rules during political elections by putting signage on their cars,” adds White. “Is it as sign? Is it in a window? Does it have to be a freestanding sign? Look very carefully at the governing documents to determine whether the sign policy covers that specific instance.

“Also, the wording in this newspaper account indicates to me that this is a rule the board has come up with rather than a covenant, which runs with the land,” she states. “Rules are held to higher scrutiny than what’s in the covenants. Under Virginia law and in most states, any rules enacted need to be reasonable, and courts tend to land on the side of free speech.”

In Wisconsin, the signs would have to be removed, reports Daniel J. Miske, CCAL, a partner at Husch Blackwell in Milwaukee who represents 650 associations at any given time. “Assuming there’s supporting language in the governing documents, most governing documents say that owners can’t change the exterior appearance of their unit without permission of the board,” he explains. “This is clearly a change to the exterior appearance.

“If this owner wants to put these signs in her windows, that would be permissible during an election because they’re clearly political signs,” he adds. “Usually, there’s a time frame that associations can impose for when political signs must be removed, and that’s generally evaluated based on a test of reasonableness.”

Been Here, Argued This One

But the signs are in a car on a street. That doesn’t matter? Again, our experts are of several opinions.

See also  Questions To Ask Before Buying Into An HOA

“If there’s a rule about political signs and a sign is put in a car, and the owner therefore argues, ‘Your rules can’t touch me,’ I don’t really think that’s the case,” surmises Hal Barrow, founder of Barrowlaw, a suburban Philadelphia law firm that has represented hundreds of associations. “There was a case 20-some years ago about parking in communities where the streets were public. The court ruled the association still had jurisdiction with regard to parking regardless of whether the streets were public property or not. So I don’t think owners could avoid enforcement of a no-sign rule by putting it in their car.”

In Oregon, however, that twist on this case might make all the difference. “In Oregon, I’d say these owners have a pretty good argument with that,” says Katie Anderson, PCAM, AMS, CMCA, the founding owner of Aperion Management in Bend, Ore., which manages about 60 condo, HOA, and townhome associations. “Here, generally the only way you can regulate signage on a vehicle is if you’re regulating commercial activity, such as a commercial vehicle parking on the street or in a driveway, the size of a vehicle, and so on.

“I’ve been managing community associations for 20 years,” she adds. “I’ve never seen a set of documents that would control someone putting some type of expression of an individual opinion on a car—because then you’d have to regulate bumper stickers. Here, this effort to police signs in a car might be considered an overreach by the community.

“The other point I’d make is that this is a really sticky time to be doing what we do,” she adds. “Everyone is very polarized on many of the issues. Before telling them someone they can’t put a certain type of sign up, I’d recommend making sure you’re towing a clean line and enforcing both sides of whatever signs are put up.”

It’s a Board Member

Did you catch the fact that, in the news report, it’s a vice president of a community association whose car houses the signs and who’s arguing that the board can’t touch her through enforcement?

We don’t know what her community’s governing documents specifically say. But when is it OK for a board member to test a community association rule?

“Never,” says Barrow. “That ought to be discussed among the board, perhaps with steps taken to try to change the rule. Intentionally flaunting the rule? Board members shouldn’t do that.”

White points to the strict standards board members are expected to uphold. “If this is something the board has the authority to regulate, the vice president shouldn’t flaunt it,” she states. “In many states, board members are held to a higher standard of care, a fiduciary standard, to uphold the covenants. How can you uphold those and thumb your nose in your personal activity? Some will say, ‘That’s my personal life!’ But you don’t take your board hat off when it comes to rules enforcement.'”

Miske also thinks it’s not wise for a board member to publicly push the boundaries. “If you don’t think a rule is reasonable, raise the issue at the next board meeting and ask, ‘Do we want to amend the rule?'”

But if this is an overreach, as she suspects, Anderson disagrees. “Just because someone sits on the board, it doesn’t mean they can’t have an opinion outside their role as a board member,” she says. “If they have this in their car, and unless this community is very, very explicit in its governing documents in controlling this, I believe the board is overreaching and the fact that this person is a vice president doesn’t matter.

I do encourage board members that they need to be in compliance with their community’s governing documents,” she notes. “But I’d be shocked if the documents here said you couldn’t have political signage on your car.”

If you don’t have sign rules, you may be able to dial back the tension in your community through communication. Barrow recently saw dueling political signs play out at an association that didn’t have a sign rule.

“In a community I represent, an owner placed one of those signs that starts with, ‘Hate has no home here,'” says Barrow. “Those signs were blue, and then there were red signs in opposition that popped up, but I’ve forgotten what they said. This was exactly the type of situation communities are trying to prevent, and one of the owners ended up suing.

“That was a 43-unit community, and 42 of the 43 owners signed off on an amendment to clarify that the association would permit no political signs,” he states. “The owner who had sued took their sign down and withdrew the lawsuit they’d filed. They caved. But that was a matter of community pressure, not rules enforcement, that did it.

“I think enforcing rules is more than just handling a situation after a violation incurs, but in promoting compliance,” argues Barrow. “Boards are a lot better off if they focus their attention on promoting the rules in advance and encouraging people to comply with them rather than trying to punish people after the fact. That wouldn’t prevent sign violations for this election, but it might prevent them in the next election cycle.

“I think boards can sometimes be too quick to respond in legal ways and not quick enough to respond through communications in the neighborly ways,” he states. “If people could talk to each other, they’d put lawyers out of business.”

HOA Homefront: Is there double jeopardy for HOA actions, and how...